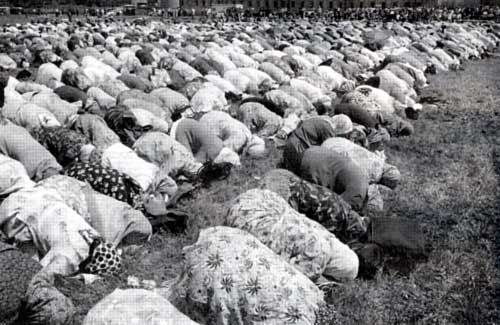 Bowed in prayer where thousands of Bosnians died.
11 July 2002 Thousands of women prayed in a ceremony in Srebenica on the 7th anniversary of the massacre of 8,000 people by Bosnian Serbs. (New York Times, Section A, page 4, 12 July 2002, photo: Reuters

Before the tragedy, the UN had declared a “safe area” for Muslims in Srebrenica. Dutch soldiers were stationed there for window dressing. When Serbian troops entered Srebrenica, the Dutch had neither the means nor the authority to stop the aggression. In the massacre that ensued, some 7,500 Bosnian Muslims were slaughtered.

art of the Institute report treats the aftermath, and is excerpted below.

The Netherlands Institute for War Documentation was established shortly after the Liberation of the Netherlands on 8 May 1945 because of the great importance of the preceding Occupation period. Ever since the foundation it has housed the archives of the Resistance, as well as illegal newspapers and pamphlets, posters and photographs, books and articles. War Documentation has the following tasks: To collect and store archives on World War II and the Netherlands and to make them accessible and available. To conduct academic research and to publish the research findings. To provide information to government institutions and private persons.

The tragedy of Srebrenica…became an issue which permeated public and political debate in the Netherlands. But this was far from being the only way in which the name Srebrenica continued to hold a tragic significance in people’s minds and hearts in the months and years following the events of July 1995.

First and foremost, this applies to the survivors and the grieving loved ones of the victims in the enclave: the original Muslim population of Srebrenica and its surrounding villages, and the many refugees who had come there to find safety. For most, the events destroyed their lives. Especially the women of Srebrenica, the wives and mothers of those who were reported missing and who, sooner or later, had to be presumed dead, still suffer the effects what happened to them every day of their lives.

Many had already experienced a series of dreadful and draining events before the Safe Area came into being. They were then required to spend another two years in an enclosed stronghold, around which the VRS applied a strategy of attrition and obstruction, intercepting supplies in order to create an untenable humanitarian situation. This all culminated in the attack, the deportation of the people and the cold-blooded mass executions. (At the time of writing this report [10 April 2002], the process of exhuming and identifying the bodies continues.)

These women, and those who were murdered, are the primary victims. In many respects, they feel abandoned by the rest of the world, in Bosnia as well as beyond.

The original people of Srebrenica those who survived have undergone a sort of Diaspora and now live in all corners of the world. Many young people in particular chose to leave Bosnia, but there are also significant concentrations in Bosnia itself, notably in Tuzla and Sarajevo. But the old community, with its ethnically mixed population, has disappeared forever.

Although the further developments have rendered Srebrenica a place in which Muslims can live if they wish, and in which many Muslims are indeed registered to vote, very few have actually returned to set up home.

Strangely enough, only few of the former Serbian population wish to return either. Predominantly, the town is now home to newcomers, many of whom have been displaced from elsewhere. They have few emotional ties with the town or the region. Srebrenica, which has the potential to be a welcoming and prosperous town, is actually a doleful and desolate little place, damaged and neglected.

The events of July 1995 also left a deep impression on the other people in the enclave at the time: the men of the Dutchbat battalion. Although they were able to return to a world which is, compared to Bosnia, an oasis of peace, safety and prosperity, many suffered persistent psychological effects following their experiences in Srebrenica. Some continue to do so today, and to a very significant degree. The feelings of powerlessness, fear, tension, apprehension and doubt they experienced continue to haunt their every moment. Physical effects include fear, violent mood swings, panic attacks, sleeplessness and difficulty in interpersonal relationships. Many were dissatisfied with the help they received.

It was some time before the best approach to psychological assistance was found in the form of ‘call-ups’ in small groups. The previous system of large-scale reunions proved ineffective.

When the men of Dutchbat returned home, the reception they received marked by public doubts and frequent negative comments concerning their performance would have done little to help them readjust. There was scant understanding for the Dutchbat version of how things ‘really’ were.

Today, there is somewhat greater appreciation and respect for their actions, at least at the personal level. At the opening of a Veterans’ Institute in Doorn on 10 May 2000, Prime Minister Wim Kok publicly stated that the responsibility for what happened should not be laid at the door of the troops, who performed their duties with great commitment under very difficult circumstances.

It is, he went on, the politicians to whom responsibility falls and it is they who must accept it.

Eventually, it was also the (international) politicians who managed to put an end to the war in Bosnia. Although the problems caused by the disintegration of the ‘old’ Yugoslavia have yet to be resolved, the situation today is less perilous than it was in the summer of 1995. Then, the UN finally broke free from the culture of improvisation and ‘muddling through’ under which it had long operated.

‘Srebrenica’ went some way towards changing this culture. However, the fall of Srebrenica did not in itself bring the end of the conflict any closer. For that, within the Bosnian theatre of war, the enclave was not significant enough.

Nevertheless, Srebrenica and Zepa demonstrated how little notice the warring sides took of Security Council resolutions or UN threats to withdraw.
The executions also had a profound effect within the UN and NATO. According to US Secretary of State Warren Christopher and American ambassador to the UN Madeleine Albright, it was the shock that the mass murders caused which brought about the radical shift in American policy.

The London conference of July 1995 established a demarcation line close to the town of Gorazde, where among others British troops were stationed. Another significant development that summer was the expulsion of the Serbs from Croatia. The deterrence strategy could thus be revived.

The UN’s staunch insistence on impartiality began to weaken. The foundation was laid for the pre-emptive use of air power without having to wait for the ‘smoking gun’. The military were allowed greater discretion in responding to incidents. Because Zepa had by now been evacuated and there was less danger of UNPROFOR personnel being taken hostage, a more active involvement became possible.
Such involvement was eventually provoked by the attack on Markale market in Sarajevo on 28 August 1995. The UN and NATO response was unequivocal. Air strikes paralysed the Bosnian Serb air defences.

From this action (‘Deliberate Force’), we can draw a direct line to the Dayton Peace Agreement of 21 November 1995. In the new circumstances, the reluctant parties eventually allowed peace to be imposed upon them. Under the Contact Group’s proposals, Srebrenica and Zepa were ‘traded’ for parts of Sarajevo. A proposal to do so had been made long before, but this had met firm and successful resistance from local hardliners.

Compared to the Vance Owen Peace Plan, after two years of war and many thousands of casualties on all sides and within all sections of the population, Dayton brought about only a very small adjustment to the way in which the territory was divided.
The fall of Srebrenica and the mass murder which followed may not in themselves have been enough to force a breakthrough in Bosnia. However, the combination of these events with the fall of Zepa, the threat to Gorazde, the Croat advance and the attack on Markale marked the beginning of the end.

There was absolutely no part for the Netherlands during the final negotiation phase. The Dutch were not even invited to the conference table. The country continued to make various military contributions to the UN mission in the former Yugoslavia, although it would no longer allow Dutch personnel to be sent into an enclave.
In addition, Dutch governmental and non-governmental organizations made a significant contribution to ongoing humanitarian aid programmes, particularly in Bosnia. This had also been a significant motive for sending Dutchbat to Srebrenica. Any focus on Srebrenica was reflected not so much in projects within the town itself (such as those that Dutchbat had attempted to some extent) but more in terms of assistance from non-governmental organizations to the people who had lived in the enclave when Dutchbat had been there.

In the Netherlands and throughout the rest of the world, the events in and around Srebrenica attracted considerable attention. People asked how it was possible for things to have gone so far; various inquiries and investigations were launched. Significant international publications include the United Nations report and that of the French parliament.

In the Netherlands, various books and articles have been written, as well as the official reports Omtrent Srebrenica, by Van Kemenade, and Vertrekpunt Den Haag, by the Bakker Commission. The production of the current report has been greatly aided by ready access to a variety of sources and the willing cooperation of many of the people involved at first hand. It aims to be a cohesive, comprehensive and thorough study which makes a substantial contribution to the knowledge and understanding of the tragedy of Srebrenica.