From 4-30 a.m. to 6 a.m. on 6th June, 1944, the lowering overside of the manned assault craft continued from the ‘Empire Battleaxe’ and from the ‘Glenearn’ in accordance with the pre-arranged timetable. The assault Companies of the 2nd Battn. went first and as they passed the remainder of the Battalion, they were given a cheer.

By 6 a.m. all were afloat, formed up, and ready for ‘the run-in.’ The tiny assault craft tossed about in the heavy sea forged slowly ahead across the seven miles separating the ships from the beaches. The underwater obstacles were difficult to negotiate in the heavy swell, but on the whole, the beaching was extremely good.

Cross-fire from mortars and artillery ashore caused casualties. Snipers were very active and numerous. There was a tremendous din. The two assault Companies met considerable opposition going up the beach, but once past that very exposed part, were able quickly to deal with the opposition and then to push ahead inland.

Difficulty arose in tending the wounded, for the Medical Officer was hit on disembarking. 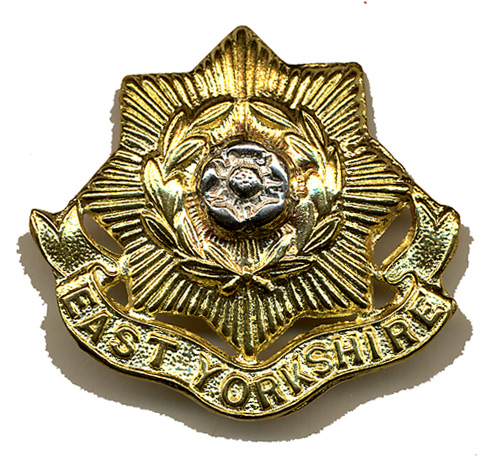 Cap badge of the East Yorks.

‘D’ Company lost their Company Commander (Major Barber) when a mortar bomb fell directly amongst the Company H.Q. Difficulty occurred in collecting the men of that Company.

By 8.30 a.m. when the first reinforcements landed, the forward companies were, however, out of sight from the beach.

‘After emerging from the houses and beach defences and into the lane behind, there was a fair amount of stuff coming down (NOTE:— i.e., shells and mortar bombs). Two very large and very frightened cart horses came galloping down the lane. A Lance Corporal with a small party of men told them to get out of the way and take cover behind a low wall, as they might otherwise get hurt. To take cover to avoid getting hurt by shells and mortar bombs had never occurred to him!’

Under enemy observation, mortared and shelled, the move across country to ‘Sole’, the first objective, was slow. The naval artillery Observation Officer could not be found when naval artillery fire against ‘Sole’ was wanted, but 76 Field Regiment shelled the place, and ‘C’ Company finally took it. ‘A’ Company had meanwhile been clearing the beach area, but arrived at ‘Sole’ in time to help in consolidating.

‘B’ Company, having finished its beach clearance, rejoined the Battalion, and an attack on ‘Daimler,’ the next of the objectives was prepared. A reconnaissance of it was being made by the C.O. and Officers, when, in a sunken lane, a salvo of enemy fire burst amongst the group. Lt.-Col. Hutchinson was hit in the arm. With the aid of some tanks of the 13/18 Hussars and under cover of artillery fire from the 76 Field Regiment, ‘A’ and ‘C’ Companies put in an attack on ‘Daimler,’ which was quickly taken with little loss. Seventy of the enemy surrendered. Many German weapons were captured. In their dugouts, the Germans had been liberally supplied with wines and champagne. These the troops gladly ‘liberated’.

Meanwhile, over the still heavily shelled beaches, the carriers, the mortars, anti-aircraft guns and so on had come ashore, though suffering casualties.

From ‘Daimler,’ the Battalion advanced to St. Aubin d’Arquenay, a considerable village on the way to Caen: it was empty of Germans and in ruins. In the village in a defensive position, having carried out its tasks, the Battalion remained until relieved by a Battalion of the K.O.S.B., after which it withdrew to a cornfield West of Hermanville.

There, it remained, dug in, for the night. ‘D’ Company was however still detached, having occupied ‘Rugger’ and ‘Cricket’ the vital canal bridges, where it remained, defensively disposed, until relieved next day by the airborne men, after which it rejoined the rest of the unit.

Major Field relates that as the Battalion was returning to Brigade reserve on the evening of ‘D’ Day, he noticed one of the men limping. On being questioned the man seemed reluctant to explain why he was limping, but pressed to do so, finally explained that he had a bullet or a piece of shell in his leg. ‘I ordered him to report sick’ says Major Field. ‘Three days later, the same man bobbed up out of a slit trench beside me. I asked after his leg, and eventually the man admitted that he had not gone sick, as he did not want to leave his mates. I had him escorted to the Regimental aid post. I believe that after a bullet had been extracted, he was evacuated to U.K. That was the spirit of those days!’

After a heavy day, it was possible to take stock. The Battalion’s success had been achieved only at considerable cost Five Officers and 60 O.R. had been killed: four Officers and 137 O.R. were wounded: three O.R. were missing. Total casualties in the 24 hours— 209—roughly a quarter of the unit’s strength at dawn that day!

Everyone was agreed that the arrangements had worked out very well. ‘Just like a training show—only easier!’ was the general verdict Despite the sadness occasioned by the loss of so many gallant comrades everyone was in good spirits.