Decoding the Mystery That is HOOAH

HOOAH is one of the most widely used military acronyms of all times, and no one can agree on its spelling, origin or even on its meaning for that matter.

Undoubtedly it will be the first acronym you will hear as you arrive at Basic Training. You will hear thousands of new soldiers utter the acronym, whisper it, shout it and even sing it. But what exactly does it mean? Heck, is it even an acronym at all?

I have scoured the Internet, referenced books, and asked military scholars. Only one conclusion has become of my research: There is no known origin for the meaning of hooah; many have opinions but there is no single theory.

Personally, when I went through Basic Training, I was taught the acronym HUA stood for I ear you, I understand you, and I acknowledge your statement. Urbandictionary.com claims the term hooah was originally used by the British in the late 1800’s in Afghanistan; then, more recently adopted by the United States Army to indicate an affirmative or a pleased response. 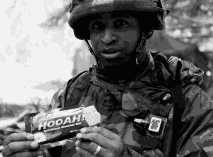 The book Absolutely American: Culture War at West Point defines huah as an all-purpose expression if you want to describe a cadet who’s very gung-ho, you call them huah if you understand instructions, say huah if you agree with what another cadet just said, murmur huah. Perhaps the broadest definition I have come across in my research might very well be the best, and even most comical definition. If I had a prize to award, I would give it to The Department of Military Science and Leadership, University of Tennessee who claim HOOAH refers to or means anything except no.

So while military experts and personnel alike disagree on the term, spelling, origin and meaning of HUA, huah, hooah , etc., it remains to be widely used throughout the military. Regardless of it’s meaning, a common aspect encompasses each of the definitions for this term. The term is an expression of high morale, confidence, motivation and spirit.