Ode in Memory of the American Volunteers Fallen For France

About the author: Alan Seeger was an American poet, a man of conscience and action. He volunteered to fight for France in 1914 and died on the field of Belloy-en-Santerre in July 1916. He was 28 years old.

Why did this American fight before his own country had entered the war? He explained himself, and the motives of his fellow volunteers, in letter a published in The New Republic on May 22, 1915. It was written from the Aisne trenches.

I have talked with so many of the young volunteers here. Their case is little known, even by the French, yet altogether interesting and appealing. They are foreigners on whom the outbreak of war laid no formal compulsion. But they had stood on the butte in springtime perhaps, as Julian and Louise stood, and looked out over the myriad twinkling lights of the beautiful city. Paris—mystic, maternal, personified, to whom they owed the happiest moments of their lives—Paris was in peril. Were they not under a moral obligation, no less binding than [that by which] their comrades were bound legally, to put their breasts between her and destruction? Without renouncing their nationality, they had yet chosen to make their homes here beyond any other city in the world. Did not the benefits and blessings they had received point them a duty that heart and conscience could not deny?

“Why did you enlist?” In every case the answer was the same. That memorable day in August came. Suddenly the old haunts were desolate, the boon companions had gone. It was unthinkable to leave the danger to them and accept only the pleasures oneself, to go on enjoying the sweet things of lit e in defence of which they were perhaps even then shedding their blood in the north. Some day they would return, and with honor—not all, but some. The old order of things would have irrevocably vanished. There would be a new companionship whose bond would be the common danger run, the common sufferings borne, the common glory shared. “And where have you been all the time, and what have you been doing?” The very question would be a reproach, though none were intended. How could they endure it? 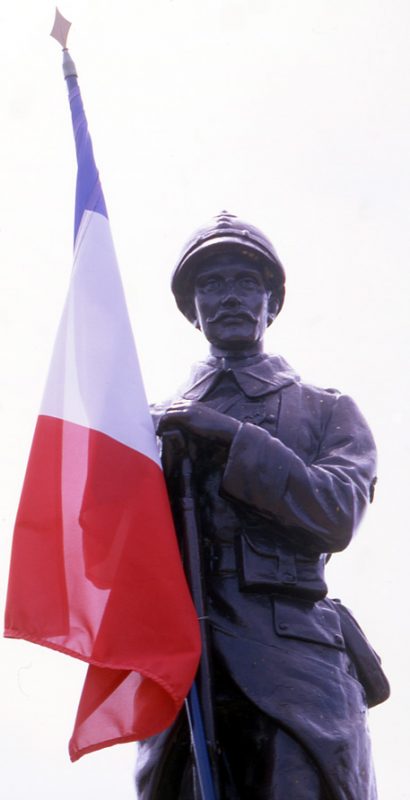 World War I memorial in France

Face to face with a situation like that, a man becomes reconciled, justifies easily the part he is playing, and comes to understand, in a universe where logic counts for so little and sentiment and the impulse of the heart for so much, the inevitableness and naturalness of war. Suddenly the world is up in arms All mankind takes sides. The same faith that made him surrender himself to the impulses of normal living and of love, forces him now to make himself the instrument through which a greater force works out its inscrutable ends through the impulses of terror and repulsion. And with no less a sense of moving in harmony with a universe where masses are in continual conflict and new combinations are engendered out of eternal collisions, he shoulders arms and marches forth with haste.

(To have been read before the statue of Lafayette and Washington in Paris, on Decoration Day, May 30, 1916.)

Ay, it is fitting on this holiday,
Commemorative of our soldier dead,
When—with sweet flowers of our New England May
Hiding the lichened stones by fifty years made gray—
Their graves in every town are garlanded,
That pious tribute should be given too
To our intrepid few
Obscurely fallen here beyond the seas.
Those to preserve their country’s greatness died;
But by the death of these
Something that we can look upon with pride
Has been achieved, nor wholly unreplied
Can sneerers triumph in the charge they make
That from a war where Freedom was at stake
America withheld and, daunted, stood aside.

Be they remembered here with each reviving spring,
Not only that in May, when life is loveliest,
Around Neuville-Saint-Vaast and the disputed crest
Of Vimy, they, superb, unfaltering,
In that fine onslaught that no fire could halt,
Parted impetuous to their first assault;
But that they brought fresh hearts and springlike too
To that high mission, and ’tis meet to strew
With twigs of lilac and spring’s earliest rose
The cenotaph of those
Who in the cause that history most endears
Fell in the sunny morn and flower of their young years.

Yet sought they neither recompense nor praise,
Nor to be mentioned in another breath
Than their blue coated comrades whose great days
It was their pride to share—ay, share even to the death!
Nay, rather, France, to you they rendered thanks
(Seeing they came for honor, not for gain),
Who, opening to them your glorious ranks,
Gave them that grand occasion to excel,
That chance to live the life most free from stain
And that rare privilege of dying well.

O friends! I know not since that war began
From which no people nobly stands aloof
If in all moments we have given proof
Of virtues that were thought American.
I know not if in all things done and said
All has been well and good,
Or if each one of us can hold his head
As proudly as he should,
Or, from the pattern of those mighty dead
Whose shades our country venerates to-day,
If we’ve not somewhat fallen and somewhat gone astray.
But you to whom our land’s good name is dear,
If there be any here
Who wonder if her manhood be decreased,
Relaxed its sinews and its blood less red
Than that at Shiloh and Antietam shed,
Be proud of these, have joy in this at least,
And cry: “Now heaven be praised
That in that hour that most imperilled her,
Menaced her liberty who foremost raised
Europe’s bright flag of freedom, some there were
Who, not unmindful of the antique debt,
Came back the generous path of Lafayette;
And when of a most formidable foe
She checked each onset, arduous to stem—
Foiled and frustrated them—
On those red fields where blow with furious blow
Was countered, whether the gigantic fray
Rolled by the Meuse or at the Bois Sabot,
Accents of ours were in the fierce melee;
And on those furthest rims of hallowed ground
Where the forlorn, the gallant charge expires,
When the slain bugler has long ceased to sound,
And on the tangled wires
The last wild rally staggers, crumbles, stops,
Withered beneath the shrapnel’s iron showers:—
Now heaven be thanked, we gave a. few brave drops;
Now heaven be thanked, a few brave drops were ours.”

There, holding still, in frozen steadfastness,
Their bayonets toward the beckoning frontiers,
They lie—our comrades—lie among their peers,
Clad in the glory of fallen warriors,
Grim clusters under thorny trellises,
Dry, furthest foam upon disastrous shores,
Leaves that made last year beautiful, still strewn
Even as they fell, unchanged, beneath the changing moon;
And earth in her divine indifference
Rolls on, and many paltry things and mean
Prate to be heard and caper to be seen.
But they are silent, calm; their eloquence
Is that incomparable attitude;
No human presences their witness are,
But summer clouds and sunset crimson-hued,
And showers and night winds and the northern star.
Nay, even our salutations seem profane,
Opposed to their Elysian quietude;
Our salutations calling from afar,
From our ignobler plane
And undistinction of our lesser parts:
Hail, brothers, and farewell; you are twice blest, brave hearts.
Double your glory is who perished thus,
For you have died for France and vindicated us.