1st.   Tanks and personnel moved out to Marshalling Area at 0815 hrs. Reveille 0500 hrs. The remaining personnel were sealed in Camp Area.

2nd.   All the remaining personnel of the Regt. moved out to Camp J. 6. at 1200 hrs. arriving at approximately 1300 hrs by route via Haywards heath, Camp J. 10 is sealed but provided with an excellent NAAFI and a cinema.
Tanks remained in J.2. Everyone had a good rest.

3rd.   At 1600 hrs the D + 2 and D + 4 personnel left J.6. to proceed to Marshalling Area D Day vehicles and personnel in Newhaven, leading tank leaving marshalling area at 1500 hrs. Loading commenced at 1800 hrs and was completed the same day.

4th.   Bad weather made it impossible to sail on this day and the whole operation was postponed for 24 hours.
In the afternoon personnel returned to T.C.V. to J.2. where they had a hot meal and a shower and went back again.

5th.   Reveille—0700 hrs. Craft move out at 0830 hrs and anchored about 3 miles outside the harbour. We finally sailed at 1230 hrs. Sea was rough and some personnel were seasick. 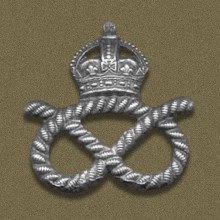 Touched down at 1030 hrs on White beach and had practically speaking a dry landing. A terrible jam on the beach where no organization appeared to be operating and no marked exits were to be seen. The majority of our tanks remained stationary for approx. 1 hour. Spasmodic shelling and a considerable amount of sniping. Traffic control seemed nonexistent and even after leaving the beach vehicles remained head to tail for long periods on the only available routes. It was then decided not to proceed to the arranged Assembly Area and Sqns were ordered to rally in the area south of HERMANVILLE. In order to save time C.O. 2 KSLI decided that his bn should proceed on foot instead of riding on the tanks. Porpoises were dumped in the Assembly Area.

The C.O. appreciated that the ridge in the vicinity of Pt. 61 was ground vital to us and ordered “C” Sqn. to seize it forthwith. They galloped for it and shortly after reported it clear of the enemy. At this juncture Comd. 185 Bde ordered “A” Sqn to proceed on a special task in connection with the clearing up of the strongpoint HILLMAN which was still holding out. R.H.Q. and “B” Sqn. then proceeded on the axis of advance. “B” Sqn was engaged by an 88mm A/Tk gun from the right flank which destroyed 2 “Fascine” Tanks, 2 other Sherman IIIs and a Sherman IV (O.P. tank) and the M.O.’s half track. “B” Sqn engaged and the gun was silenced. The C.O. then ordered “B” Sqn to take up battle positions on the Pt. 61 feature with tanks to the S.W. in case an outflanking attack by enemy armour should develop. “C” Sqn. was now engaged by a Bty of 122mm guns firing East from the wooded area around PERIER-SUR-LE-DANS, and temporarily held up. The KSLI were now fighting hard in BEUVILLE but the C.O. asked for a Coy to clear up the wooded strip to our right flank. His request was acceded to by Col. Maurice and in spite of running the gauntlet the tank advance continued without further loss.

Nos. 1 and 2 Tps. “C” Sqn and elements of the Recce Tp. moved on fast on the right flank and succeeded in crossing the anti-tank obstacle S.W. of Biéville. No. 4 Tp. on the left was held up at the obstacle as there was no possible crossing in that area.
No. 1 Tp. then succeeded in working forward into LEBISEY with the leading infantry. C.O. KSLI then decided to launch an attack on LEBISEY at 2114 hrs.  [A question mark was handwritten next to the “2114 hrs” above and a note reads, “No. It was at 1615!”]

Recce Tp. now reported enemy tanks advancing North from the direction of CAEN.
C.O. asked for the immediate release of “A” Sqn. who arrived just in time to take up battle positions to the West of Biéville. The enemy tanks advanced very fast and were engaged when the reached the Western end of the A/Tk obstacle. Two were K.O.’d and the remainder moved West into the wooded country in the direction of LE LANDEL. Two troops “A” Sqn moved across to our right flank and when the German tanks emerged No. 1 Tp engaged and destroyed four. Other enemy tanks swung still more to the West and moved fast for the high ground above Périers-SUR-LE-DAN. “B” Sqn. ordered 3 17 pdr tanks and one Sherman III to engage and 3 more German tanks were destroyed. No other enemy tanks then [advanced] from the woods.
Neither the 2 Warwicks or 1 Norfolks were available to assist on the attack on LEBISEY and in view of the heavy losses sustained by the K.S.L.I. in a hard days fighting Col. Maurice decided not to attack that night.
At last light the regiment rallied and leagured West of Biéville but in spite of innumerable snipers in the adjacent woods we were not seriously disturbed in the 3 1/2 hours in Leaguer.
Note. In the encounter with enemy tanks only 2 hits were scored on our tanks and neither of them was put out of action. The enemy K.O.’d one M.10 S.P. A/Tk gun. We destroyed seven and K.O.’d two enemy tanks all Mk. IV Specials. Some of which were wrongly described as Mk. VI tanks owing to the additional armour plates fitted.
Our Casualties were Lieut. D.F. Alexander and Winterhalder killed. Troopers Rowse, Furnivall, Bradbury, Roberts, and Issott killed.

At first light the regiment less one Sqn. was ordered back to the high ground North of Périers-SUR-LE-DAN and took up battle positions facing South and South West. “A” Sqn. remained in the area Biéville and throughout the day supported attacks by 2 Warwicks and 1 Norfolks on LEBISEY. The enemy appeared to have reinforced strongly during the previous night and all the attacks were unsuccessful, the infantry suffering heavily losses.
The ground to the East of Biéville was unsuitable for the purpose of the required support and it was found that there were no possible crossing places of the natural A/Tk obstacle between the main axis and the road BLAINVILLE-CAEN.
185 Bde eventually decided to consolidate North of the obstacle. No. 1 Tp. “A” Sqn. destroyed a Staff Car in the LE LANDEL area and machine-gunned a party of 10 Germans. The only survivor surrendered. They may have been manning two 105mm S.P. guns which were found intact and which had moved up during the night. The remainder of the Regiment stayed in battle positions all day although a few enemy tanks were seen near the Western extremity of the A/Tk obstacle shortly before last light they did not advance.
We were shelled intermittently during the day but casualties were light amounting to one killed and two wounded.
Casualties. No tank casualties.
Personnel — Trooper Gillingham killed.
Cpl. Taylor and Tpr. Webster wounded.