The Normandy Diary Of Marie-Louise Osmont 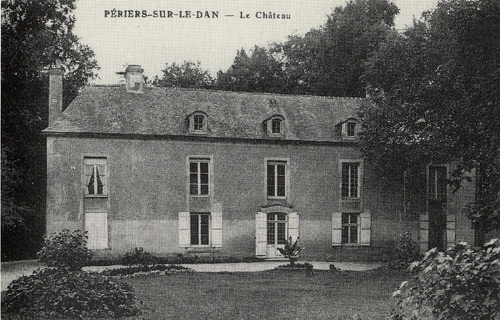 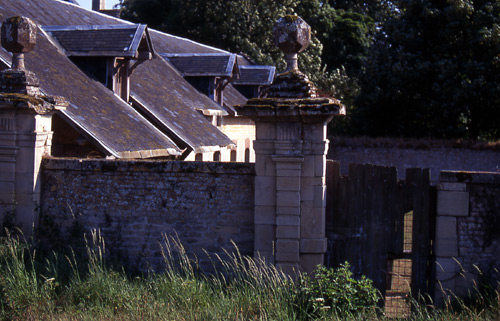 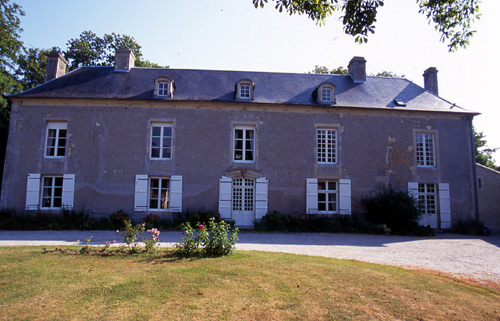 During the night of the fifth to the sixth, I am awakened by a considerable rumbling of airplanes and by cannon fire, prolonged but fairly far away. Then noises in the garden and in the house: talking, loading ammunition boxes, nailing. I get up, go to the window. I see the big fifteen-ton truck arriving, coming from the drive and pulling up in front of the stoop, and another truck backing up to the dining room window. I gather that a departure has begun, and I envision the unit moving to a new camp, and in the middle of the night as always. I’m annoyed at the idea of changing troops. I stay up, wondering. I watch through the keyhole of my door, which faces that of the Kommandantur. In the light, I catch sight of shadows moving in the office. They’re dragging sacks, boxes; they come up and go down. I recognize Mr. George, the bookkeeper, the Spiess. They don’t look happy. I stay by the window. The airplanes fly over in tight formations, round and round continuously. I envision German airplanes overflying the departure. I’m surprised. But the cannon fire gets closer, intensifies, pounds methodically; what’s going on? Great turmoil in the garden. The men have shouted, “Alarm,” from man to man, but the siren  hasn’t sounded. The Spiess fidgets, plays with the dog, with his usual air of a man playing at being important…nothing more.

Little by little the gray dawn comes up, but this time around, from the intensity of the aircraft and the cannon an idea springs to mind: landing! I get dressed hurriedly. I cross the garden, the men recognize me. In one of the foxholes in front of the house, I recognize one of the young men from the office; he has headphones on his ears, the telephone having been moved there. Airplanes, cannon right on the coast, almost on us. I cross the road, run to the farm, come across Maltemps. “Well!” I say, “Is this it, this time?” “Yes,” he says, “I think so, and I’m really afraid we’re in a sector that’s being attacked; that’s going to be something!” We’re deafened by the airplanes, which make a never-ending round, very low; obviously what I thought were German airplanes are quite simply English ones, protecting the landing. Coming from the sea, a dense artificial cloud; it’s ominous and begins to be alarming; the first shells hiss over our heads. I feel cold; I’m agitated. I go back home, dress more warmly, close the doors; I go get Bernice to get into the trench, a quick bowl of milk, and we run—just in time! The shells hiss and explode continually. In the trench in the farmyard (the one that was dug in 1940) we find three or four Germans: Leo the cook, his helper, and two others, crouching, not proud (except for Leo, who stays outside to watch). We ask them, “Tommy come?” They say yes, with conviction. Morning in the trench, with overhead the hisses and whines that make you bend even lower. For fun Leo fires a rifle shot at a low-flying airplane, but the Spiess appears and chews him out horribly; this is not the time to attract attention. Shells are exploding everywhere, and not far away, with short moments of calm; we take advantage of these to run and deal with the animals, and we return with hearts pounding to burrow into the trench. Each time a shell hisses by too low, I cling to the back of the cook’s helper; it makes me feel a little more secure, and he turns around with a vague smile. The fact is that we’re all afraid.

Around eleven o’clock, during a lull, I go back to the farm. They show me fifteen or so impact points in the back pasture, impact points on the side toward the church as well, broken branches. We pick up pieces of the missiles, big shell fragments. Mr. George and the replacement Spiess come to talk with us; we watch the heavy artificial cloud over the sea being driven by the wind, and especially some balloons in the shape of dirigibles, whose purpose we don’t understand. We look at them through field glasses. The Germans talk about the landing, but without nervousness, as if speaking of something that hasn’t reached us yet; they look at the collected fragments with interest and smile at us as usual. When someone says to them, “You leave?” they answer, “No, not leave.” We don’t know what to think; probably they don’t either.

One of their men is wounded in the knee. He was in one of the trucks parked on the road across from the church; two comrades lend support, and they take him away in a small car.

Around noon a bit of a lull. We leave to try to have lunch; I busy myself with the fire, Bernice with the soup and potatoes; it’s cooking. We start to seat ourselves around the table, two mouthfuls of soup, and then everything changes with tremendous speed. Someone—a Frenchman on the road, the soldiers at the gate—someone said: “The Tommies!” We watch the soldiers. They hide on both sides of the gate, watching in the distance in panic, confusion painted on their faces. And suddenly we hear these words: “The tanks!” A first burst of tracer bullets, very red, sweeps the gate; the men crouch down. Bernice and I hide in a comer of the room. There’s banging in every direction. We’re going to have to go somewhere else. Standing in our comer, we gulp a plate of soup, while the Spiess, who has been shouting orders, comes with revolver in hand to see whether men are hiding with us. Everything starts happening. Evidently, they’re going to try to leave with their trucks. A German tank arrives and takes the Spiess away. The shells bang.

The mean Spiess had guts. He came and went heedless of the shells, attended to everything—and he probably took responsibility for having the trucks leave; orders from higher up didn’t seem to come.

Impossible to stay in this house at the edge of the road with such thin walls. We cut two slices of bread, the same amount of cold meat, and hugging the walls of the outbuildings, we make it to the trench, we fall in, and just in time! There’s hissing and banging everywhere, our stomachs are churning, we feel suffocated, there’s a smell of gunpowder. We stretch out completely, lying on the straw at the far end. The afternoon is endless. At one point the sound of footsteps makes us jump up and look toward the opening, expecting anything. Consternation: It’s the replacement Spiess (the nice dark-haired one), who, with a revolver in his hand, his submachine gun under his other arm, and followed by a soldier carrying two boxes of ammunition on his shoulder, has come to see whether there are any stragglers still in the holes. He seems exhausted. He’s wounded near the ear and there’s a trickle of blood; he sits down for a few moments on the edge of the trench, looking at us with sympathy and as if feeling sorry for us. A few words about his wound, a few words about “the Tommies here,” and he leaves. We continue to wait.

The first English soldiers appear in the pasture behind the farm at two o’clock. They come down, submachine guns and machine guns under their arms, walking steadily, not trying to hide at all. 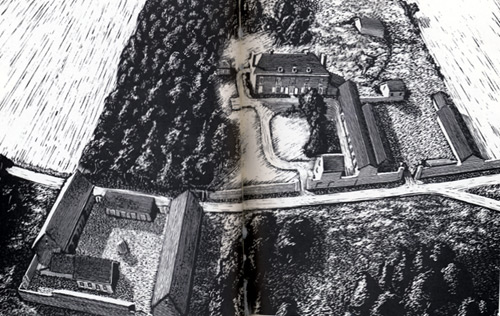 Le Château Périers, aerial view of buildings and grounds. Narrow buildings to the right are stables. Farther to the right is a small building for making cheese. The greenhouse is in the garden behind the château. Bernice and her family lived in the gatehouse at the entrance to the driveway. The Maltemps, tenant farmers, lived across the road in a cluster of farm buildings. 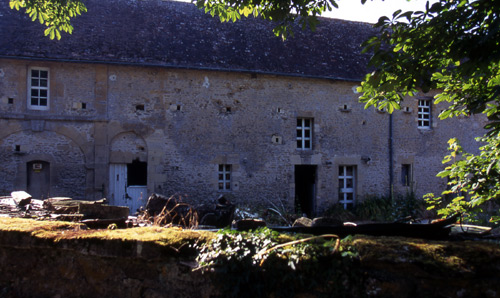 Around six o’clock a lull. We get out and go toward the house to care for the animals and get things to spend the night underground. And then we see the first damage. Branches of the big walnut broken, roof on the outbuildings heavily damaged, a big hole all the way up, a heap of broken roof tiles on the ground, a few windowpanes at my place —hundreds of slates blown off the château, walls cracked, first-floor shutters won’t close—but at Bernice’s it’s worse. An airplane or tank shell (?) has exploded on the paving in her kitchen at the corner of the stairs, and the whole interior of the room is devastated: the big clock, dishes, cooking equipment, walls, everything is riddled with holes, the dishes in broken pieces, as are almost all the windowpanes. The dog Frick that I had shut up in the next room so he wouldn’t get killed on the road, is all right and sleeping on a seat. But we realize that if we had stayed there, we would both have been killed. In the face of this certainty, Bernice takes the disaster very well; we try to straighten up the unspeakable mess a little. Out of the question to eat the soup and mashed potatoes that have been prepared; everything is black with dust and full of shards of glass. Someone gives us some soup from the farm. We talk with them for a short while and note that the Germans haven’t taken away all the trucks from the drive; there are also a lot of vehicles still in the park.

At the farm, even worse damage. Roof heavily damaged on the hayloft. Jean’s room, on the second floor, pierced through by a shell, a beam broken, shell fragments have pulverized his armoire, everything is covered with enough plaster rubble to kill an entire family. Bernadette’s room also penetrated, but less so. In the cattle barn a shell has made a very big hole, killed a superb calf, a ewe, and wounded another calf!

In the bedrooms of the farm all the suits, all the clothes are riddled by fragments and unwearable, the hats burned.

In the drive leading to the village, broken trees blocking the way, cut down by the shells, wide breaches in the wall from the passage of the tanks, pillars at the entrance of the old farm on the ground in bits. A cow killed in the pasture. 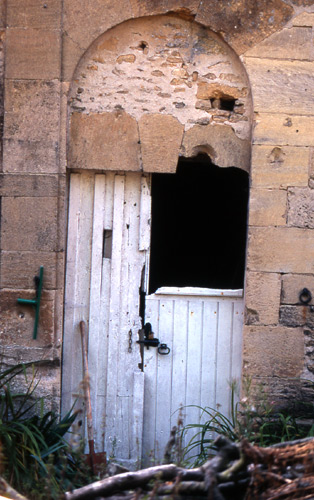 Detail of photo above showing doorway that was never repaired after the war.

The English tanks are silhouetted from time to time on the road above Periers. Grand impassioned exchanges on the road with the people from the farm; we are all stupefied by the suddenness of events. I take a few steps down the drive, toward the Deveraux house, and suddenly I see the replacement Spiess and his comrade hugging the wall of the pasture. I tell him that he must still have comrades at the guns, since we can still hear the battery firing. You feel that these two men are lost, disoriented, sad. Later, almost night, I see them again, their faces deliberately blackened with charcoal, crossing the park. What will be their fate? How many of them are still in the area, hiding and watching?

Night in the trench, lying on the straw, Bernice and I. It isn’t cold. The shells hiss continually over our heads, red streaks in the sky. A few hours of disturbed sleep. Stiff all over.