Symbol of the Rakkasans. The 187th is now part of the 101st Airborne.

The 187th Infantry Regiment was constituted on 12 November 1942 at Camp Mackall, North Carolina. On 25 February 1943 it was activated and designated as a glider infantry regiment assigned to the 11th Airborne Division.

In May 1944, the Regiment deployed to the southwest Pacific and engaged the enemy on the night of 6 December 1944 when it was attacked by the Japanese 3d Parachute Regiment. The Rakkasans repelled the enemy force and three months later seized Lipa Airfield on Luzon. The 187th fought continuously until January 1945 on Leyte and suffered heavy casualties taking Purple Heart Hill. At Nasugbu Bay, the Regiment performed a para-amphibious assault and fought their way into the jungle to Tagaytay Ridge. They also captured Fort McKinley in the 11th Airborne Divisions attack on Manila and conquered the heavily defended Mount Macolod. At 0100 hours on 30 August 1945, the first planes carrying 187th soldiers left for Atsugi Airfield. 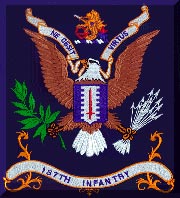 This was a momentous occasion; the Rakkasans were the first American and foreign troops to enter Japan in 2,000 years. While serving as part of the American Occupation Force, the Japanese gave the paratroopers of the 187th Infantry Regiment the nickname “Rakkasan”, which loosely translated means “falling umbrella.”

On 27 August 1950, the 187th Airborne Infantry Regiment was reorganized and redesignated as the 187th Airborne Regimental Combat Team. The unit was quickly sent to Korea and within the first month defeated an enemy force of 3,000 soldiers. The Rakkasans then performed a textbook parachute assault and heavy drop at Sukchon-Sunchon. They also defeated the Chinese at the Battle of Wonju, performed another record-breaking airborne operation into Munsan-ni Valley, fought battles at bloody Inje and Wonton-ni, and quelled prison-camp riots at Koje-do.

On 13 December 1967, the 3d Battalion, 187th Infantry Regiment reported for duty in the Republic of Vietnam. The Rakkasans were called upon to perform many hazardous operations including defense of Bien Hoa Military Base and the US Embassy in Saigon. They were awarded a Valorous Unit Citation for their actions at Dong Ngai and a Presidential Unit Citation for the Battle of Dong Ap Bia Mountain. In battles from the A Shau Valley to the Iron Triangle, the Rakkasans added nine decorations and twelve battle streamers to the Regiments proud lineage.

In September 1990, the Rakkasans began deploying to the Kingdom of Saudi Arabia, during Operation DESERT SHIELD. On 20 and 21 February 1991, two companies from 1st Battalion air assaulted into Objective Weber and captured 434 Iraqi soldiers. On 25 February 1991, the 48th Anniversary of the Regiment, the Rakkasans conducted the largest and deepest air assault operation in history, as it struck 155 miles behind enemy lines into the Euphrates River Valley.

The 187th Infantry Regiment is the only airborne regiment in the history of the US Army to fight in every war since the inception of airborne tactics. From glider to parachute to helicopter, the Rakkasans have entered combat in each mode of airborne warfare and has pioneered its implementation. Throughout their history, the Rakkasans have upheld the motto “Ne Desit Virtus  Let Valor Not Fail” and continue to do so today.