The 3rd Infantry Division (Mechanized) “Rock of the Marne” 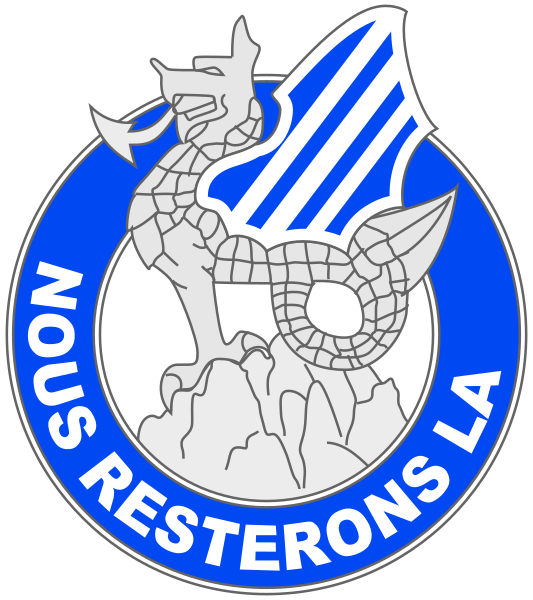 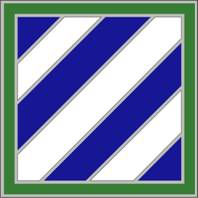 The Institute of Heraldry, Public domain, via Wikimedia Commons

Above right: The 3d Infantry Division shoulder sleeve insignia. The three white stripes symbolize the three major operations in World War I in which the division participated. The blue field symbolizes the loyalty of those who have sacrificed themselves in defense of liberty and democracy.

Go to: The 3d in the World Wars

Activated in November 1917 during World War I at Camp Greene, North Carolina, the Division went into combat for the first time eight months later in France. At midnight on July 14, 1918, the Division earned lasting distinction. Engaged in the Aisne-Marne Offensive, the Division was protecting Paris at a position on the banks of the Marne River. When flanking units retreated, then Division Commander, Major General Joseph Dickman, told our French allies “Nous Resterons La – We shall remain here.” The 3rd Infantry Division remained rock solid and earned its reputation as the “Rock of the Marne”.

In April 1958 to April 1996, the Marne Division was station in Germany serving as a key link in securing the defense of Western Europe and contributing greatly to the ultimate triumph over Communism in the Cold War in 1989.

In November 1990, soldiers of the 3rd Infantry Division were once again called into action. Following Iraq’s invasion of Kuwait, more than 6,000 Marne men and women deployed to the Middle East in support of Operation Desert Storm as part of the Allied Coalition.

In 1996 the Division was re-stationed at Fort Stewart, Fort Benning, and Hunter Army Airfield, Georgia. The Division repeatedly demonstrated its deployability by maintaining a brigade task force presence in Kuwait. It has also moved sizeable forces to Egypt, Bosnia and Kosovo in partnership training and peacekeeping missions. Since Sept 11, 2001, units have been sent to Afghanistan, Pakistan and other Middle Eastern countries in the War on Terrorism.

Early in 2003 the deployability and fighting capability of the Marne Division was highly visible worldwide when the entire Division deployed to Kuwait. As Operation Iraqi Freedom began in early April, the division was called on to spearhead the advance to Baghdad. The overwhelming Coalition force took Baghdad in 21 days, leading to the end of Saddam Hussein’s tyranny over the people of Iraq. Today the Division remains in Iraq contributing to stabilization and nation building with Coalition forces and the people of that long oppressed nation.