Operation postponed for 24 hrs owing to a strong Westerly Wind.

Operation “ON”.  The convoy composed chiefly of LCI’s and LCT’s assembles outside NEWHAVEN at 1100 hrs and sails for FRANCE at 1400 hrs. Still an unpleasant strong West Wind and a grey sky. — Meanwhile the various vehicle parties of the Bn had been assembling and embarking at PORTSMOUTH and the LONDON DOCKS in LCT’s, LST’s, and MT ships. 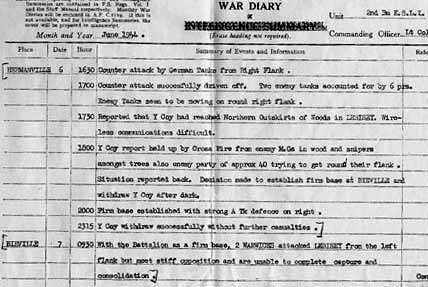 A page of the diary for D-Day

The voyage proved uneventful. Soon after 0800 hrs news came that 8 INF BDE had touched down and later we learned that they had secured the immediate beachhead. We were cheered by the news that 6 AIRBORNE DIV had captured intact the bridges over the CANAL DECAEN and RIVER ORNE.

The LCI’s carrying the Bn touched down very much as planned at LA BRECHE D’HERMANVILLE. It was NOT an easy landing, 4 to 5 ft of water and a sea running. The beach was still under Shell Fire. However with the aid of ropes carried ashore by the Navy the heavily ladened men struggled ashore with few casualties and little loss of equipment. One LCI shortly after we had disembarked was hit by Shell Fire and sunk. All Companies then moved forward to the Assembly Area as ordered whilst mopping up operations were still going on in houses adjacent to the beaches.

By 1100 hrs the Bn (less “SP” Coy) had assembled in the orchards immediately north of HERMANVILLE as planned. Every officer and man had carried ashore a sandbag labelled with his name and in there was placed gasmasks, cardigans and some other items of clothing to lighten our load and then dumped by Coys. This was well worth while and 95% were recovered in M.T. on the following day, the missing 5% having been destroyed by shelling. The STAFFS YEO (Sherman Tks) riding on the tank of which unit, the bn was supposed to advance on CAEN, were landing but making little progress forward, owing to congestion on the roads.

The Bde Comd passed the Assembly Area on an airborne bicycle to be joined by the C.O. on a similar mount.

C.O leaves Brigadier to find out situation with Staff Yeo.

C.O. reports to Bde Comd in HERMANVILLE that only about one and a half Squadrons of STAFFS YEO are clear of the beaches and that a large minefield apparently covered the right flank of HERMANVILLE across the axis of advance originally planned for the tanks. Bde Comd then orders the Bn to advance on foot along main axis. The STAFFS YEO to marry up as soon as possible.

Bn Advance in the following order X, W, Y, Z Coys. — Major REA (Bty Comd 7 Fd Regt) and Capt GOWER (FOB) travelled with C.O. — FOO’s from 7 and 33 Fd Regt’s had reported and been allotted to the leading Coys and STAFFS YEO. 7, 33, and 76 FD REGTS were in support as far as available but 33 and 76 FD REGTS were still involved in the 8 INF BDE Battle.

X Coy came under fairly heavy Mortar and Artillery Fire on the forward slopes of the ridge South of HERMANVILLE (to be known as the Périers RIDGE).

X Coy report enemy posts in the fields on top and just beyond PERIERS RIDGE, in particular M.G. posts holding them up from the right.

C.O. orders W Coy to come up on right and take on M.G. post. Adjutant reports to C.O. in A.C.V. having just got forward from the beaches.

CO orders Z Coy to attack  enemy battery at PERIERS SUR-LE-DAN which is holding up some tanks on the right and dominating the main axis.

X Coy held up by accurate sniping from BEUVILLE.

W and Y Coys reaches forward edges of BIEVILLE. Y Coy report no opposition during advance on left W Coy having received some casualties on the way proceed to “Mop up” area of Chateau.

Counter attack successfully driven off. Two enemy tanks accounted for by 6 prs. Enemy tanks seen to be moving on round right flank.

Counter attack successfully driven off. Two enemy tanks accounted for by 6 prs. Enemy tanks seen to be moving on round right flank.

Y Coy report held up by Cross Fire from enemy M.Gs in wood and snipers amongst trees also enemy party of approx 40 trying to get round their flank.

Situation reported back. Decision made to establish firm base at BIEVILLE and withdraw Y Coy after dark.

Firm base established with strong A Tk defence on right.

With the Battalion as a firm base, 2 WARWICKS attacked LEBISEY from the left flank but meet stiff opposition and are unable to complete capture and consolidation.

After a wet landing which cost us amongst other things, our private stocks of cigarettes, we disentangled ourselves from the turmoil of the beaches, and to the tune of shellfire made our way to the Assembly Area. Here we got sorted out and set off as Advance Guard Coy, moving astride the main axis toward BEUVILLE. It was with sorrow that we learnt later that our craft had been sunk by two direct hits almost as soon as she had turned.

We bumped the first lot of Boche on the ridge overlooking the sea, where we had an unpleasant bout of Shellfire and we were held up for a bit by M.Gs hidden in the corn. We then spread out with two platoons advancing rather like a row of beaters through the crops, and from time to time we would despatch a small post of Boche and then on again. We sent back several prisoners and killed several more and so it went until we reached the village of BEUVILLE. Up to this time we had lost 15-20 of our numbers, but the men were in grand heart and out for revenge.

BEUVILLE proved something of an obstacle, and we were held up for some time by snipers in the houses, who were almost impossible to locate. They picked off all section commanders of the leading platoon, and while we were trying to sort this out, the other two platoons encircled the village to the right and pushed on well. We eventually followed in their tracks with the third platoon and went on to Biéville. “W” and “Y” Coys were now in front of us and we arrived in time to witness a most exciting battle between our Anti Tank Guns and a Hun Tank Attack. When this subsided we were given an area on the Biéville feature where we dug ourselves in between bouts of Shelling and settled in for the night ready for whatever the Hun had to offer.

Our Casualties for the day amounted to 24, but spirits were high and we all felt we wanted to get to grips.