Note: This interview took place in and around the ‘manoir’ which had been the Bouriez family home in 1944. The Dyvrande and Juquin families were neighbors. Questions and answers, in French and English, were directed via Philippe Bouriez. The answers given are the gist of a response. Summaries are given in italics. 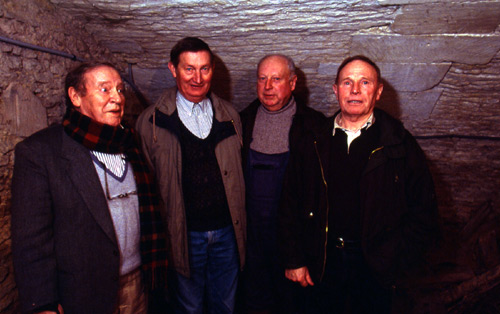 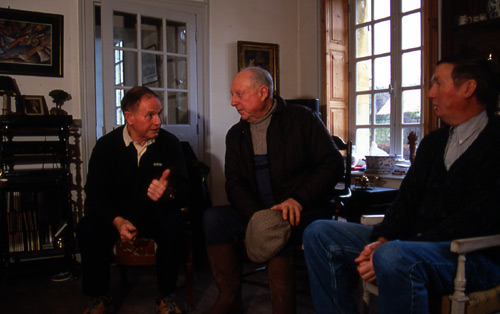 Messrs. Dyvrande and Juquin during the interview. (Photos by Chuck Solomon, 1999)

Q:  Could you tell me your ages in 1944, and whether you had taken shelter in the Bouriez cellar?

A:  Jacques and Michel Dyvrande were 11 and 8 respectively: both had spent some time in the cellar.

The brothers Dyvrande lived about 100 metres down the village street, opposite the farm. The boys slept in the cellar, and their mother stayed there all the time, but during the daytime the boys were outside, fascinated by the soldiers and activity.

All agreed that the North – South orientation of the houses in the village had been important in limiting damage. Most of the German fire came directly from the South (Lebisey and beyond).

Q:  How long did the Germans stay in Bieville after the landings?

A:  They were still in the château until the next day, but were ‘fought out’ that day, and never returned. There was still an artillery battery at La Bijude for some days after that: La Bijude is within the village area, but about two kilometres from the main village.

Some Germans stayed behind in the village—or perhaps slipped back later— because some of the villagers spotted them hidden up trees near the château. They told the British about them, and soldiers came and shot them out of the trees.

Philippe added that his mother spotted another up a tree, and this man was shot in the park trying to get away. Some of these soldiers had radios, and they were thought to be acting as spotters for the German artillery.

Q:  When was the church tower brought down?

A:  About a week after the landing. Both sides were using such places for observation: Bieville was always under observation from a water tower on the ridge at Lebisey, which was not destroyed throughout the fighting.

A:  You must understand that Bieville then was a lot smaller than it is today. The population during the war was perhaps 300: now, with Beuville, it is 2,200. Most of the buildings were damaged, but few of them very seriously. When the Germans were driven out, they attempted to set buildings on fire with incendiary bullets, but they did not succeed in this.

Trees around buildings were very good protection – both château and manoir have tree-lined alleys as their southern approach, and the trees served to screen from observation, and took many of the missiles which might otherwise have damaged the buildings. Not all the trees which were hit survived— indeed, some types of tree are much better at withstanding damage from bullets and shells. Beech trees are very poor survivors, and if hit tended to die. Linden trees, conversely, proved very resilient

Q:  Was there much shelling around the village on D-Day?

A:  Very little, although M. Juquin’s father-in-law was killed by fragments in his garden on that day.

The heavy shelling, from the Germans, started the following day, as the British troops were in positions not very far beyond the village. It was obvious that the Germans were firing from close range as there was very little time between hearing the report from the gun and the arrival of the shell itself.

Q:  How about damage from bombing?

A:  The only occasions were firstly on 6 June when a lone German plane dropped a few bombs nearby without causing any damage, and then not again until after the fall of Caen, when there was a minor raid at night, again without any damage.

Q:  What do you know of Mme. Barrett?

A:  She lived in a house on the main road, and had two daughters. One, Germaine, was a step-daughter, but she was evacuated on 7 June after being badly wounded by a shell while working in her kitchen. It is believed she later died at Bayeux.

Mme. Barrett was afterwards spoken of as having used her nursing skills to look after wounded soldiers, but none of the boys saw this for themselves, although they roamed further afield than most of the adults at that time.

Q:  What do you remember particularly about that time?

A:  The meat ration was very small—100 gm. each per week, and Normans love meat!

During the first few days after the landing, 25 or 30 cows were killed by gunfire, so suddenly there was plenty of meat again. There were no refrigerators, so we had to eat as much as we could before the bodies went bad.

There were a lot of casualties amongst the horses too—almost all of them died, but probably from thirst rather than gunfire, as it was not safe to try and take water to the fields where the horses were.

Juquin remembers seeing two horses close together in a field behind the château and a shell landing right between them, but neither was hurt because the shell proved to be a “dud”. His father had another horse which survived despite having quite a nasty shrapnel wound.

Q:  Was water a problem for everybody?

A:  Yes. There was a well in the village street, but this must have been under good observation by the Germans because it was shelled very regularly. It was not safe to visit this during daylight.

The boys were then sent to get water from a spring in the marshy area behind the manoir, and they do not remember this area being shot at.

Q:  How much time did you spend in the cellar?

A:  On D-Day, there were a lot of people there for most of the day. After that, people used to go back there to sleep (the boys remembered sleeping underneath chairs, between the chair-legs).

The women spent most of their time there, but the men went out as often as they thought it reasonably safe, to try and take care of their livestock, but the boys only went back to the cellar when they had to.

During the three weeks that people were living there, a second exit was made through the wall opposite the original entrance, as people began to worry about what would happen if the entrance became blocked by rubble from the house above. This was very difficult, as the walls were well-built and very thick.

When an American Officer first came to the cellar, he obviously was offended by the smell inside, and got out very quickly to continue his discussions with the villagers about evacuating them.

They had not been outside in the courtyard very long before a shell landed, and the officer overcame his distaste for the thick atmosphere of the cellar very quickly indeed!

Not everybody from the village was prepared to be evacuated: eight people stayed on, including Philippe Bouriez, M. Dyvrande (father of the brothers), and one woman [name unknown].

Q:  How much did you see of the British troops?

A:  Not very much, in terms of personal contact. The Intelligence Sergeant from the Warwicks could speak good French, and made it his business to speak to the villagers. Otherwise, because the troops were dug-in in front of the village, and only used to come back through the village towards dawn and dusk, there was very little contact.

Units used to be exchanged between the forward positions and the ‘support’ area around Beuville, but Bieville was too close to the front line for this. After the Lebisey ridge had been captured, there were seldom troops close at hand except for an artillery unit which arrived shortly before delivering a 4-hour bombardment on the morning of 8 July, and the Canadians who were stationed around the village ‘at rest’ after the capture of Caen.

Immediately before the landings, a glider-towing aircraft had been brought down close to Bieville: M. Dyvrande (Senior) had been among the men of the village who had recovered the bodies of the five airmen, all of whom had been killed, and buried them in the churchyard in a single grave. The grave is still there.

Early on the morning of D-Day, M. Dyvrande (Senior) had been setting out to unchain his horses, which were tethered in the fields overnight, when he saw German soldiers escorting a British prisoner in overalls. As this was around 06.00, the soldier would have been a stray from the British 6th Airborne. At that point, there was no other indication of an imminent landing.

Q:  Where were there flak batteries locally?

A:  Colleville [sur Orne]and Lebisey. There were no flak guns in Bieville, even though the château was used for most of early 1944 as the headquarters of a Luftwaffe infantry regiment. Only their officers lived at the château.

None of the boys realised enough of what was going on to be seriously frightened. Their immediate reaction was delight to see chocolate again (given to them by soldiers with whom they could only communicate by smiles), and cigarettes.

These they were supposed to take back to their fathers, but more than the odd one was surreptitiously smoked en route!

After the fighting had moved on a little further, the Dyvrande boys remember searching for food and clothing in abandoned fox-holes and slit-trenches.

Juquin, much more the phlegmatic Norman peasant, was adamant that even though there were soldiers outside the village for weeks, as long as the village was not directly under fire life proceeded more-or-less normally.

Q:  After the Germans had left Bieville soon after the landing, did you see anything more of them?

A:  While the British were still just outside the village, it was common knowledge that the area around the village, and particularly the marsh (le marais) and the ground towards Lebisey, was patrolled by both sides at night. Apart from the spotters and snipers found on 7 and 8 June, the only other Germans seen thereafter were prisoners.

Before the end of the summer of 1944, prisoners from a large camp established in Caen were being used, under military supervision, to clear the minefields laid by both armies. By the spring of 1945, prisoners were also being used, this time under civilian supervision, to fill in trenches, dug-outs, gun-pits etc., and generally make good agricultural land.

Q:  How soon was damage made good to the houses and farms in Bieville?

A:  People repaired the damage as best they could, but the main difficulty was lack of materials. Glass was very short, so windows stayed boarded up for many months. In the manoir alone 253 separate panes needed to be replaced.

There were no grants or compensation available. The damage to the church tower was not repaired for about 10 years, when enough money had been collected.

Q:  Did you ever fear that the Germans might defeat the invading forces?

A:  No: it was obvious from the very first that the Allied fire-power was immensely superior to the Germans’, and after June, the sight of a German aircraft was almost unknown. All agreed that an Allied defeat was inconceivable.

Q:  Is there much consciousness of the events of the Liberation in Bieville now?

A:  Not really. The population has changed so greatly, and there are not many people left who can remember 1944 at all clearly.

The last large commemoration had been in 1994: these days people no longer display French and British flags on 6 June as they once had. The older people are always pleased to welcome the old soldiers who visit the area, but it is noticeable that many fewer of them come any more.