German soldiers watched the sea. Hundred of yards in the distance, landing craft slammed up and down on the white-crested waves. The Germans swallowed hard and wished the men around them good luck. There was time to remember what Nazi officers had said. Democracy made people weak. The Allies were sure to run away when bullets flew. As fingers tightened on triggers, the German soldiers could only pray that this was true.

On the water, landing craft came under artillery fire from shore. The Allied bombardment had sounded so impressive when the soldiers were miles away at sea. But for all the noise, the Germans were fresh as daisies in Courseulles. It was once a peaceful harbor village. Now it was a smoking ruin where only the enemy was alive. 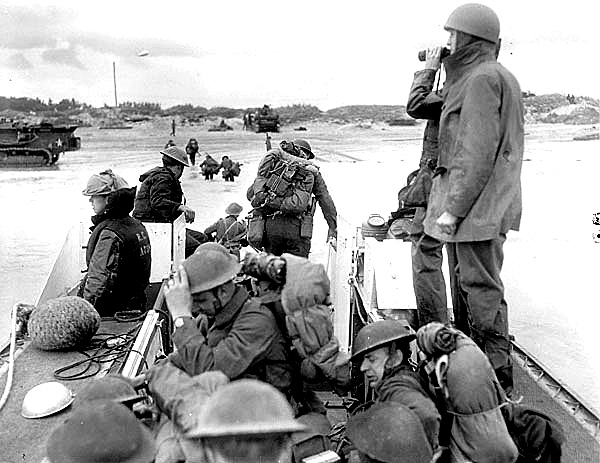 At the back of a landing craft, a Winnipeg soldier joked to ease the tension. He said, in a funny British accent, “I say, old chaps, anyone for tennis?” Other men joined in: “Pilot, are you sure this is the ferry to Paris?” “Home was never like this.” “Not much like the old ferry back home.” “It’s Paris for me, first chance I get.”

“Can the chatter back there! We’re going in!”

Enemy bullets beat against the metal ramps. Then ramps went down and Canadians began to die.

Men fell all around him as Corporal W.J. Klos thrashed through the deep water. Klos was a big, powerful man whose nickname was “Bull”. A bullet tore into Corporal Klos’ stomach. A second bullet tore into his leg. The corporal’s rage was greater than his pain. He staggered to the beach and shot an enemy gunner. Klos dropped his rifle and fought another German with his bare hands. Bleeding into the sand, Corporal Klos died with his hands around the throat of the enemy. Behind him, the Winnipegs charged through the fire.

Captain Phil Gower was everywhere at once among the men. He organized assaults on the pillboxes and kept the Winnipegs moving across a fortified bridge. Captain Gower urged men on. He took off his helmet and waved it in the air to show there was nothing to fear.

Meanwhile, tanks had landed. Lieutenant “Red” Goff led a troop of Hussar tanks across the bridge and fired at a camouflaged fort. The Germans shot back and a Hussar tank was hit. The crew bailed out and all five men were machine gunned and killed. The Hussars fired on the fort with a vengeance.

Machine gun and mortar nests surrendered when surrounded by the Winnipegs. A British observer said that the Canadians went at it like hockey players. But this was definitely not a game. When the shooting stopped, Captain Gower and twenty-six men of his company were still standing. More than a hundred Winnipeg soldiers had been killed or wounded.

On the right of the Pegs, Charlie Company of the Canadian Scottish battalion assaulted a fortified chateau at Vaux. A large German gun had already been knocked out, courtesy of the Royal Navy. A platoon led by Lieutenant Roger Schjelderup attacked three machine gun nests and took fifteen prisoners. One of the prisoners led the Can Scots through land mines, then to an open field beyond. 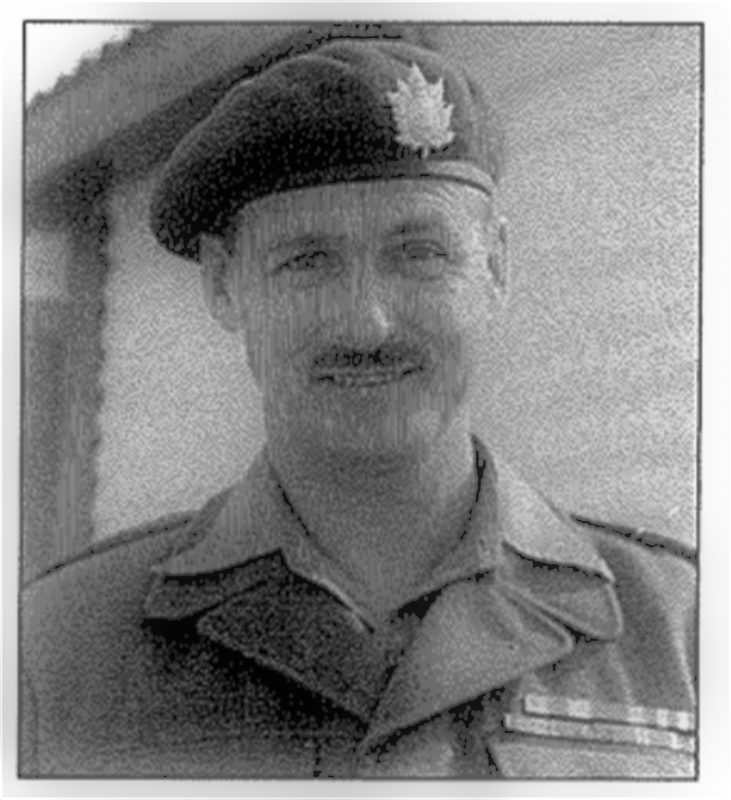 The soldiers moved through a field of tall grain in extended formation. The sudden loneliness of each man was no greater than the pain of homesickness. The fields looked just like the farms at home. Their German prisoners, held in compounds back on Juno, would be seeing Canada soon. They would spend the rest of the war on work farms. One German prisoner of war later described his labor in Canada as “heaven on earth”.

In Normandy, the Canadian soldiers pressed on.

Tanks landed ahead of the Regina Rifle infantry and, firing at close range, took on the German guns.

Peering out his periscope, a soldier of the 1st Hussars saw another tank “waddle right up to this fort thing. The tank fired twenty-eight rounds before it was holed. We came alongside him. The fire was very heavy. Guns were popping off everywhere and machine gun bullets pelted our hull. We broke through the wire into the dunes and among the fortified houses. We wheeled around and spotted an anti-tank gun behind the casement. The Jerries were manning it, but we crashed through a brick wall and surprised them.” Two direct hits passed through a gun shield and the German gun blew up.

A tank is a moving metal box with guns sticking out. On the inside, it’s like a two-storey fort for the five-man crew. The commander, gunner, and gun loader are on the upper level. Below them, separated by a metal floor, sat the driver and machine gunner. When the hatches were closed, the men peered out through periscopes and talked to each other over a wireless. An enemy shell could “hole” the metal wall of a tank, and the shell would explode inside. If the crew survived the blast, there was little time to escape before the fuel and ammunition blew up. A tank could become an incinerator at any moment in battle.

The Reginas were stopped at the seawall by enemy fire. Able Company commander Major Duncan Grosch was wounded.

Lieutenant Bill Grayson had a daredevil spirit. And he didn’t want to let his commanding officer down. Lieutenant Grayson ran through a gap in the barbed wire and made it to the side of a house. A concrete gun emplacement, blasting the beach, was down an alley. Between Grayson and the emplacement was more barbed wire and a machine gun nest. The machine gun fired on a fixed arc at regular intervals. Grayson calculated there was just enough time between bursts of fire to reach the emplacement.

The lieutenant made a mad dash but got entangled in the barbed wire. Perhaps the German gunner was surprised because the machine gun stopped shooting. It was just for a few moments but that was long enough for Grayson to tear himself free. He tossed a grenade through an aperture in the emplacement. The grenade exploded and the lieutenant dived in. He got to his feet in time to see the gun crew race out the back door. The last man threw a grenade. It landed between Grayson’s feet. The lieutenant picked it up and threw it back at the German. The enemy soldier escaped before it went off.

Lieutenant Grayson raced after the enemy through the back door and into a trench. It zig-zagged to an underground shelter. Down the hole, Grayson could see the enemy, and heard shouts of “Kamerad!”. Grayson motioned with his pistol for the Germans to come out. Trapped by one incredibly brave soldier, thirty-five Germans surrendered and their artillery gun was destroyed. 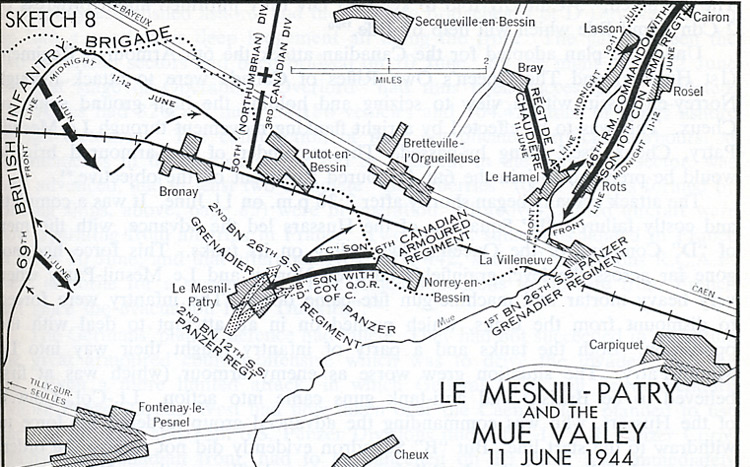 Map of operations in Le Mesnil-Patry and the Mue Valley, 11 June 1944. (From The Victory Campaign) 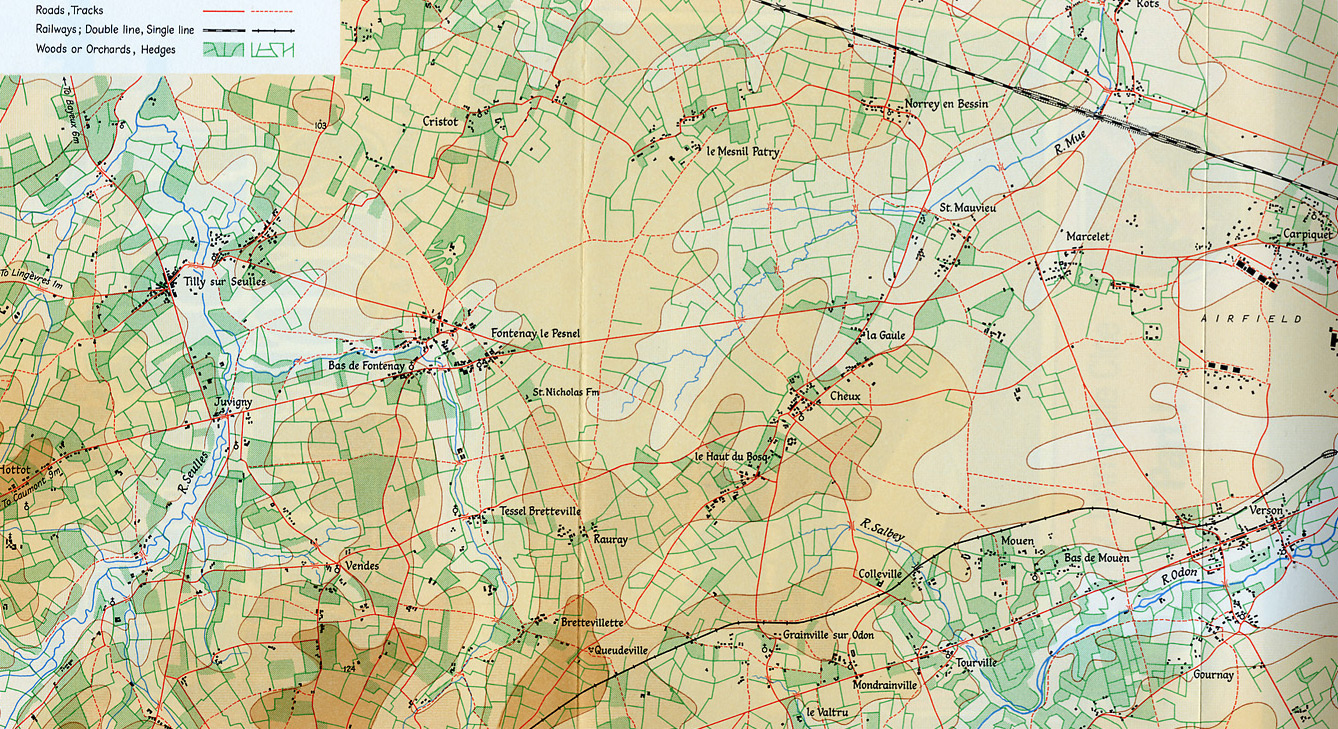 Large color showing area between Tilly sur Seulles and Carpiquet (including Mesnil-Patry). (From Victory in the West)

The Queen’s Own Rifles

Rifleman Doug Hester and Rifleman Doug Reed were singing “For Me and My Gal” as they watched the shore. Then ramps went down in crossfire and Doug Reed was dead. Three other men were killed in the first seconds of their war. One was Fred Harris, the son of a Toronto doctor, who had turned down every chance to be somewhere else on D-Day.

Hester jumped from the craft. The riflemen, drenched and freezing, splashed their way to the obstacles for protection. A burst of gunfire went through Corporal John Gibson’s back pack. Corporal Gibson turned to Hester, grinned, and said, “That was close, Dougie.” Then another burst of gunfire killed him.

The beach ahead was 200 yards of open ground that ended at a ten-foot high seawall. The whole area was swept by enemy fire. Major Elliot Dalton led men to the wall. Two thirds of a platoon fell to the sand. Sergeant Charlie Smith was wounded but fought his way with ten survivors to the Bernières railway station. Glass shattered and wood splintered as they were hit with gunfire from houses along the street. Sergeant Smith collapsed and a corporal took over. Five men of the platoon were still able to fight. Using a Piat, the Canadians blew a hole through the wall of a house, and the explosion killed the German snipers inside.

Behind the Queen’s Own Rifles, tanks of the Fort Garry Horse were landing. And behind the tanks was the infantry battalion from Quebec: Le Régiment de la Chaudière.

The tide was quickly rising, and mined obstacles were underwater. Five of the Chaud’s landing craft hit mines and sank. Soldiers struggled to reach shore, losing equipment and weapons in the surf. A navy captain reported that one group of infantry “still had their knives and were quite willing to fight with this weapon alone.” The French Canadians (most did have rifles) advanced into Bernières where the residents were thrilled with their liberators. The regiment’s diarist wrote, “Les francais sont assez accueillants et beaucoup nous acclament au milieu des ruines de leurs maisons.” (“The French, surrounded by the ruins of their houses, welcomed them with open arms.”)

Bernières was ringed with German artillery. The Chauds and a machine gun platoon of Cameron Highlanders were pinned down at the main exit from the village.

Lieutenant Walter Moisan led an attack. A smoke grenade he carried stopped a bullet. This might have been lucky, but the grenade ignited and set fire to Moisan’s uniform. Still, he stayed at the head of the attack until the enemy position was overrun.

Nearby, a German gun hit the Queen’s Own Rifles as they gathered beside a church. Captain Ben Dunkelman set mortar weapons in a ditch about two hundred yards from the German artillery. Corporal Tom McKenzie saw the mortars fire. There was a blast and Dunkelman jumped in the air with his hands over his head in victory.

By 11:40 a.m., another brigade was landing. So many soldiers in one place were a perfect target for the big German guns, but men such as Captain Dunkelman and Lieutenant Moisan had cleared the way forward. The one man was a Jewish Canadian; the other was French Canadian. The soldiers behind them were Scottish Canadians. United as a country, diversity was strength.