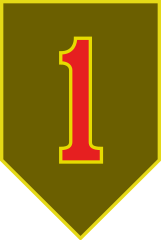 Bookmarks England / Crossing the Channel / Hitting the beaches / I had sprained my ankle in the marshalling area and had to go ashore carrying a cane instead of a rifle. I used it to very good effect to just whack people until they moved. / Tanks, communication, and confusion

The narrative below is from a television interview recorded in 1972. The recording (made by Thames Television for a TV program on D-Day) is now part of the Imperial War Museum’s oral history collection.

The interview was transcribed and edited as a single narrative. Topic headings have been added to aid the reader. Editorial interpolations for intelligibility are in brackets.

At the time of this interview, John Finke was a retired colonel. On D-Day, Finke was commander of F Company, 16th Infantry.

We’d left Sicily without any equipment at all. It was all left behind. We took over new equipment when we got back to England.

It was something that we hadn’t experienced before. We had had great shortages wherever we were but here there were just masses of stuff. Extra ammunition was no problem even for the practice exercises. We always had to conserve ammunition very much because of shipping. A limited amount could reach us, you know. But at this time, the build-up had been going on for quite awhile and we were in great shape. Anything we wanted we could ask for.

We arrived in late October and spent a winter there. It’s lovely country but had to get acclimated to the change in climate. We spent a year in North Africa and Sicily and it was pretty hot down here.

The assault units crossed on transports, and transferred to landing craft off the beach. We felt rather sorry for our third battalion, which was the reserve battalion. They crossed on landing craft and that must have been pretty unpleasant even though they were large landing craft. But there wasn’t enough weather to bother the transports and we had a very comfortable crossing.

I had a rather interesting experience. I had lived in a small town in Michigan before I went into the service, and there was a doctor there whom I knew and who was the ship’s doctor on our transport. He’d been looking for me all over England. We’d made three trips on the transport and he’d never known I was aboard until the crossing to Normandy and we discovered each other. I never saw him again because I wasn’t evacuated on the same ship that I came in on.

We hit the beach around 6:30 in the morning. I think we were twelve minutes off schedule, late.

On the way into the beach we had quite a few people that got seasick. We were in these little landing craft. It was very rough and we puttered around from two o’clock in the morning until about four, just going around in circles waiting for everything to get organized, and then finally made the run-in to the beach.

Our landing area was dictated by the presence of the beach obstacles. We had to land about 400 yards from the actual seawall. [The men wading ashore were halted due to the] shock of tremendous amount of fire on them and no place to go.

We had a great deal of difficulty getting the men to move. There was great deal of enemy fire and they would take cover behind some of these obstacles that were there to catch assault craft. They were about the size of a ten or twelve foot telephone pole with a teller mine on the top of it.

The whole area was just full of these obstacles. Any port in a storm.  People would just try to take cover behind one of these poles. Well, it didn’t provide any cover so you just had to force them to move no matter how you did it. It had so happened, I had sprained my ankle in the marshalling area and had to go ashore carrying a cane instead of a rifle. I used it to very good effect to just whack people until they moved.

And it was not much fun obviously.

It was very rough getting up the beach because the sand was wet and deep and people would sink in. Everybody had a heck of a large load to carry so that the men were worn out when they got up there. Of course we lost quite a few on the way up. In fact, in that 400 yards I might have lost 25% of my command before we even got to the seawall. Of the 4 officers that were killed on the beach from my company, I think three of them were killed right almost right at the water’s edge.

At the time, you [as a commander] didn’t have a chance to think about it because you didn’t really know. You knew that lieutenant so and so wasn’t around but that didn’t mean that he was necessarily dead. Or wounded even. He could have moved on inland.

Once you get involved in something like this, you’re thinking about what you have to do and more or less forget about your own personal danger because you don’t have time to think about it. The more you have to do the better off you are in a situation like that.

My company had lost all of its officers by the time I was wounded around noon. In the assault, we lost three or four of the best [officers]. I lost a great deal of very fine non-commissioned officers. We went in with seven officers and when I was wounded at 12:30 the first sergeant (what the British call a company sergeant major) had to take over command of the unit. Because there were no officers to take it. *1*

Tanks, communications, and confusion on the beach

There was a great deal of confusion [during the run-in and landing]. We didn’t realize what things meant. For instance, we thought there’d been a lot of aircraft shot down because the water was just covered with these little bright orange life rafts. Well, they were actually survivors from the DD tanks. They had a canvas thing and they swam in the water and used the motor of the tank to push themselves by means of a propeller. Well, I think 99% of them swamped and went down into the drink. And the troops, the tank crews, had been able to get out in most cases and were in these orange rafts. We didn’t realize the meaning of that until we got ashore and found that all these tanks that were supposed to be with us weren’t there.

They later brought in a few of what they called wader tanks which were brought unloaded at water’s edge and then came in. But very few of those had much influence on the initial situation. It was actually just the assault infantry that had to shoulder the burden.

On our right flank there was a National Guard unit (what the British call a Territorial unit) that supposedly was to land miles away. There had been very heavy fire and the Navy, or they, I don’t know, had just shifted in to an intermediate area. My unit was shifted from a place I had selected for them to land into an area that was right in the mouth of the beach exit where all weapons where sited to fire. This was the Easy Three Exit. We then had to move laterally up the beach until we could leave it. Because that was really impossible to get through that area because the pillboxes were sited, their main fires were right converging right on the mouth of the exit.

Communications were bad because the hand-carried radios were not that reliable. We hadn’t anticipated the water would be quite as rough and the waterproofing didn’t always work. Actually, most communications, when we got to the beach, was by way of messengers. When the later people came in, like the Naval Shore Fire Control parties and the Forward Air Controllers, those type of people had massive sets of equipment. They apparently had built-in protection from the elements in a way that these little hand-carried things didn’t. And the distances weren’t great. I would say laterally it was at the most about three quarters of a mile from one flank to the other, maybe much less. We could have done just as well if we’d planned on using messengers and trained the men to be better messengers.