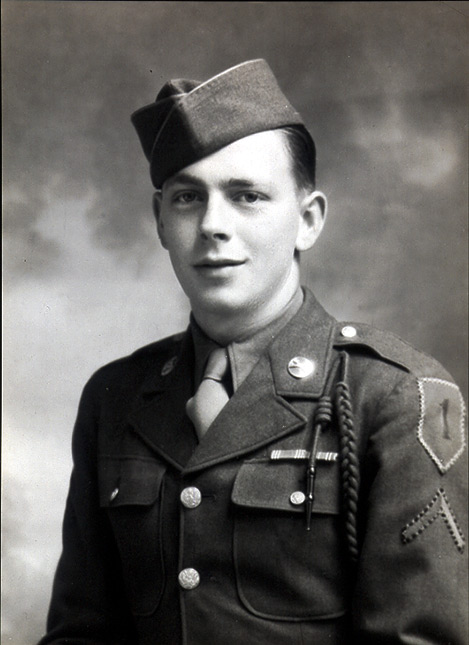 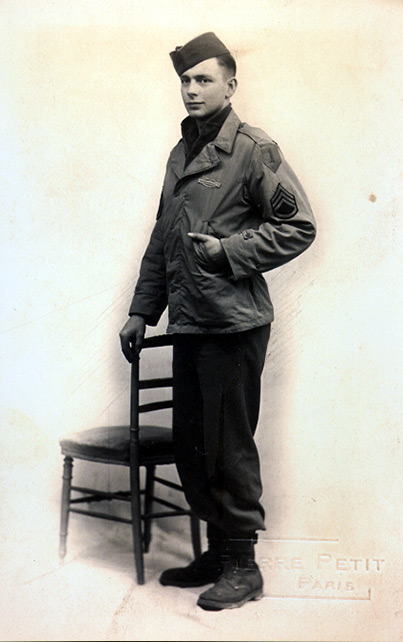 LEFT: Bruce Buck as a Pfc. in Bridport, England, before D-Day.

The narrative below was edited from a recorded conversation on 3 July 2001.

Bruce Buck joined E Company after the liberation of Sicily. He was wounded on D-Day, healed up, and sent back to fight.

He had no real memory of Lt. Spalding or of the incident Spalding describes in the Pogue narrative. It seems that Spalding was too dazed by his first moments under fire to notice that Buck had been wounded on the beach.

I was born and raised on a farm in Shelton, Nebraska. That’s about the central part of the state, right on the I-80 that goes through there. At that time it was 30 Highway.

I graduated high school in 1940, and was drafted from Buffalo County in Nebraska, but I went from Scotts Buff County. I trained in Fort Belvoir, Virginia. Engineers. I went to cook and baker’s school at Fort Belvoir in order to stay another thirteen weeks in the States.

Then we went Shenango [replacement center in Pennsylvania]. There and back to Newport News and out from there.

We didn’t know where the hell we were going. We were replacements. Period.

I got to Casablanca, North Africa on the 13th of June 1943. They talk about North Africa being sand, but actually it isn’t. It’s kind of a prairie, there’s a lot of brush like Wyoming, sagebrush and stuff like that. In a dry year you’d see that right in the United States, that and worse than you see in North Africa. It was as bad as a lot of Arizona, let’s put it that way.

From Casablanca we went by 40/8 boxcars to our first stop, Oran; then from Oran to Algiers, and from Algiers on to Tunisia.

The trek across there in there in those 40/8 boxcars plus this, that, and the other thing took quite awhile before we got to the repple depots. From Tunisia I took an LCI to Palermo, Sicily.

Some of us went to one division, some to another. A few got shipped out and went on to Italy. I’m glad we didn’t go there. Ours was bad enough.

I joined E Company of the 16th Infantry in Sicily.

I didn’t fit in because I was just a greenhorn, but I made out all right. They bunked me up with a big tall guy. He was six foot something. And we had a tent together. His feet stuck out one end and his head out the other. We got along good because he liked to sit up and play cards and that’s what we did at night. Never for money. He always played Hearts and stuff like that.

We ate a lot of almonds. Go to the show once in awhile.

Sicily is up and down. They live in the valleys and farm on the sides of the hill where they terrace the land. Around here, you look at 80 acres or so as a field. There they got one acre, half acre, they got a few vegetables planted or something going. So they take advantage of everything. Grape vines are here and everywhere in Sicily.

I asked Buck: “You were trained as an engineer and a cook and you were assigned to the infantry as a rifleman?” Buck laughed and said, “Yeah! I got dysentery and when I got out of that, I went to the 16th Infantry.”

I was a private, and made Pfc. shortly after that. We did a little training and then we left Sicily on the 23rd of October 1943.

Lt. Hutch was with us in Sicily and he got malaria on the way back to England. He got about as yellow as yellow could be. I don’t think he was hospitalized with it. I had it too but it wasn’t bad enough that I got hospitalized either.

We lost track of Hutch from our platoon but then he come back up there around Hürtgen forest or somewhere along in there. He became company commander.

We took English boats, strung all out, and arrived in England on November 5th 1943. We went into Liverpool and trucked down not far from the English Channel to Bridport, England. Not far from the coast.

We did a lot of training there and went to the moors and took amphibious training and all of that. The whole works.

Streczyk made me platoon runner. I just didn’t fit in anywhere and they finally gave me a sniper’s rifle and that’s what I carried.

Streczyk was a little Polack. He was good. He knew what he was doing. Curt Colwell was quite a guy, yes, he was. We got acquainted in England there. We went to the same pub.

Our section all went up about the same place. [The rest of company followed.] About the only path the rest of the company had was what our boys went through there. They went up through the traps and off the beach and on up the side of the hill.

I didn’t get all the way up the slope. I was wounded and was having trouble trying to see.

I got shot [coming up the beach]. Tracers coming at us from every direction as we were getting off [the boat]. I had that sniper rifle as I was running over the beach towards the high-water wall. Bullet hit my rifle stock up above my left hand. I was holding it out in front of me. And it shattered. Bent the barrel on the rifle, and broke the stock, and showered all of that metal fragments and wounded my eyes.

[I asked if he remember a medic, George Bowen. Buck said, “I don’t remember that last name at all.”]

Somebody helped me out there. I used my canteen and canteen cup to wash my eyes out so I could get up and get off there, and get off the beach. Somebody bandaged me up. Then we went on up the hill.

Streczyk, laughs he was coming back down the hill with a bunch of prisoners of war. There were Polish prisoners and he was kicking them in the ass and talking to them in Polack wanted to know why they fought so hard.

He was really raising hell with them.

After quite awhile we all [all the wounded] went back down, got on a boat, and got out of there.

I got typhoid out of the damn deal. Back to that field hospital in England, off the boat, they started treating me for typhoid fever. I had a hell of a time, but then I went to Oxford, England and recuperated there.

We had spent time there in England, but Oxford was different, kind of a college town that was different from Bridport. Bridport everybody was friendly. Oxford was kind of a stuffed shirt place. Well, there was a lot of GI’s there too I suppose that’s the reason for that. They had a big hospital there.

I was out about two months and from Oxford they sent me right back to company. [The company was on the frontline.] It didn’t bother me that much. We were all pretty well acquainted and wanted to stick together, everybody tried to help each other.

When I come back they used me quite a bit. We took the Aachen waterworks. Waterworks Hill, that’s the hill we stayed on and held that. I was the one they always sent back to the CP which is down over the side of the hill behind us to get ammunition.

I would take almost a case of bandoliers and put them on my neck and shoulders and run back up through there. There was an open space through there and they always shot the hell out of me, trying to shoot me. And I just had to make a run for it, that’s all you can do.

Just sheer guts, I guess, I don’t know. Just determination more than anything.

I was doing for Streczyk, for the whole platoon, going down bringing ammunition up there for them so they could ward off the Germans trying to get up the hill. I think I got the Silver Star out of that deal.

I made it to Staff Sergeant. That was after Streczyk left. I think he went off with a nervous breakdown. They drug him out of where we were at, up at the line. Just cracked up, that’s all.

We were pulled off line, the whole outfit, and some of us were given passes to go to Paris. And I was one of them. Went back to Paris, I think we had 48 hours or something like that. I and another sergeant got off on one them “what they call them over there” underground tunnel deals, trains. And we tried to find our way back and we didn’t. We wound up walking and hitchhiking and finally got hold of this G.I.

We had to go back to this American Red Cross building when we got back there, why, the truck had gone. So we had to wait until we got hold of some other ride to get back to the company. Back on line, as soon as we got back.

I got in on the surrender, at the end of the war up there, in Czechoslovakia.

My BAR man was Joe Acoviak. His assistant was Ned Cooper, ammunition man. They both joined us somewhere after the Hürtgen forest.

We were pretty well settled in Frant Lazne, Czechoslovakia. It’s a resort area. And CP found out it was pretty nice for us, so they made us move out. Moved us out 10, 12 miles.

And that’s where Joe got shot.

I was taking a couple fellows to get a fellow who had been shot out there.  And Joe Acoviak got shot through the stomach. He was shot up pretty bad.

After the surrender, I was held up there in Germany. I left Germany went on back to France with the 7th Armored Division. They attached me to that to send me home,

I left Marseilles, France October 4th arrived in Norfolk the 12th of October. Went by train from Norfolk back to Fort Logan, Colorado. Discharged on October 22nd 1945.

I was going to go back in then I talked myself out of it. I decided I wanted to get the hell out of there.

I had a lot of problems when I first got out of the service. I had terrible nightmares. I tried to block out, or blank out, a lot of that. I wouldn’t watch any movies that pertained to war pictures or anything like that. And when TV come in, I wouldn’t watch any of that because it would bring back too many memories.

I don’t know as [fighting a war] would ever be worth it to an individual. But I think we accomplished what we started out to do, don’t you?