The original article, from the Streczyk family album.

It isn’t that T/Sgt. Philip Streczyk collects medals ”he just seems to acquire them. ”I don’t know why I got these, the blonde 25-year-old First Division soldier will tell you,” They were all a surprise to me.”

According to Army records his medals were awarded for a series of exploits that set a new mark in individual heroism. As one of the most decorated enlisted men in World War II, the young New Jersey soldier has established a standard of courage, leadership and initiative that more than meets the highest traditions of the armed forces of the United States.

Leader of a rifle platoon in the 2nd Battalion, 16th Infantry, First Division, Streczyk proudly wears over his right breast pocket the unit citation with two oak leaf clusters awarded the battalion for meritorious action at Gafsa in North Africa, where it opened a vital supply line for the British against overwhelming odds; for Sicily, where the battalion beat off a tank attack with only infantry weapons; for Normandy, where it established and maintained a vital part of the beachhead against desperate odds. 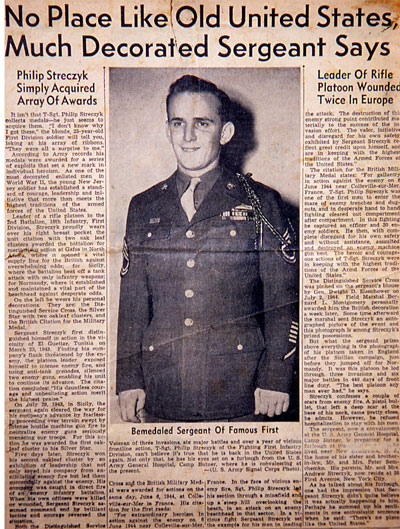 On the left he wears his personal decorations. They are: the Distinguished Service Cross, the Silver Star with two Oak Leaf clusters, and the British Citation for the Military Medal.

Sergeant Streczyk first distinguished himself in action in the vicinity of El Guettar, Tunisia on March 23, 1943. Finding his company’s flank threatened by the enemy, the platoon leader exposed himself to intense enemy fire, and using anti-tank grenades, silenced two enemy guns, enabling his unit to continue its advance. The citation concludes: ”His dauntless courage and unhesitating action merit the highest praise.”

On July 29, 1943, in Sicily, the sergeant again cleared the way for his company’s advance by fearlessly proceeding over terrain swept by intense hostile machine gun fire to neutralize enemy guns seriously menacing our troops. For this action, he was awarded the first oak lead cluster to his Silver State.

Five days later, Streczyk won his second Oak Leaf cluster by an exhibition of leadership that not only saved his company from annihilating enemy fire but led them successfully against the enemy, His company was caught in direct fire of an enemy infantry battalion. When his own officers were killed or wounded, Sergeant Streczyk assumed command and by brilliant tactics and courage reversed the situation.

Both the Distinguished Service Cross and the British Military Medal were awarded for actions on the same day, June 6 1944, at Colleville-sur-Mer in France. His citation for the first reads:

”For extraordinary heroism in action against the enemy on 6 June 1944 near Colleville-sur-Mer, France. In the face of vicious enemy fire, Sgt. Philip Streczyk led his section through a minefield and up a steep hill overlooking the beach, in an attack on an enemy beachhead in that sector. In a vicious fight Sergeant Streczyk set an example for his men in leading the attack. The destruction of this enemy strong point contributed materially to the success of the invasion effort. The valor, initiative and disregard for his safety he exhibited reflect great credit on himself and are in keeping with the highest traditions of the armed forces.”

The citation for the British Military Medal states:

”For gallantry in action against the enemy on 6 June 1944 near Colleville-sur-Mer, France. T/Sgt. Streczyk was one of the first men to enter the maze of trenches and dugouts, and in desperate hand to hand fighting cleared out compartment after compartment. In this fighting he captured an officer and 20 enemy soldiers. He then, with complete disregard for own safety and without assistance, assaulted and destroyed an enemy machine gun nest. The heroic and courageous actions of T/Sgt. Streczyk were in keeping with the highest traditions of the Armed Forces of the United States.”

The Distinguished Service Cross was pinned on the sergeant’s blouse by Gen. Dwight D. Eisenhower on July 2, 1944. Field Marshall Bernard L. Montgomery personally awarded him the British decoration a week later. Some time afterward the marshall sent Streczyk an autographed picture of the event and this photograph is among Streczyk’s prized possessions.

But what the sergeant prizes above everything is the photograph of his platoon taken in England after the Sicilian campaign, just before they jumped off for Normandy. It was this platoon he led through three invasions and six major battles in 440 days of front line duty. ”The best platoon a man ever had” he says.

Streczyk confesses a couple of scars from enemy fire. A pistol bullet, that left a deep scar at the base of his neck, came pretty close he admits. However, he refused hospitalization to stay with his men.

The sergeant, now a convalescent at the U.S. Army General Hospital, Camp Butner is preparing for a furlough. Before the war, he lived near East Brunswick, N.J., the home of his sister and brother-in-law, Mr. and Mrs. Peter Semchemko. His parents, Mr. and Mrs. Andrew Streczyk, now reside at 58 First Avenue, New York City.

As he talked about his furlough, one had he impression that Sergeant Streczyk didn’t quite believe it was actually happening to him. Perhaps he summed up his sentiments in one enthusiastic sentence when he said, ”There’s no place like the United States.”