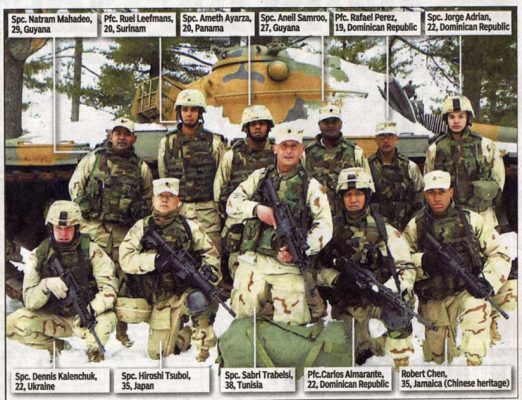 Two weeks ago, these 11 foreign-born New Yorkers weren’t even citizens yet. Two weeks from now, they’ll be serving their adopted country on the front lines in Iraq as full-fledged Americans.

During a Feb. 7 ceremony, with hundreds of cheering friends and family looking on, these 11 soldiers of the 2nd Battalion 108th Infantry of the New York  National Guard turned in their green cards and put the citizen into soldier.

“It was an exhilarating experience”, said Woodhaven resident Ruel Leefmans, 20, of the citizenship ceremony held at Fort Drum, the sprawling New York Outpost on the Canadian border. “It took me 17 years, but I finally got my citizenship.”

As the men prepared to ship out over the weekend, Capt. Edward Cappellano looked them over and barked, “You guys look like super troopers” receiving a rousing “hooah” in response.

The 2nd Battalion resembles a Foreign Legion company of yesteryear, hailing from Africa, South America, the Ukraine, Japan and other ports of call. Some who are putting their new American lives on the line have a unique perspective on the situation in Iraq. Hiroshi Tsuboi of Brooklyn grew up in Japan and knows a little about another U.S. occupation.

“After World War n, America came to Japan and did a lot of good things,”  said Tsuboi, 35. “We’ll be doing the same thing over there with the Iraqi people.”

Although Ameth Ayarza is only 20, he is getting his second glimpse of a U.S. intervention. He was 6 when American troops poured into his native Panama during the overthrow of Manuel Noriega in   1989.   He’s fully equipped to realize what the Iraqi kids are going through.

“I was walking from my house to one of my aunt’s and I saw tanks and troops all around,” Ayarza, of Brooklyn, recalled.

“At first, I was scared but after I learned what was going on, it wasn’t that bad. My parents said stay away from them, but later they said it was OK.”

The oldest of the group is Sabri Trabeli, 38, from Tunisia. His parents own a computer business in Tunis, the capital city. Trabelsi left his folks mystified when he cashed in that comfortable life in 2001 to go blue-collar in America. He was working at a Sbarro pizza in the World   Trade Center when 9/11 changed his life.

“Two of my friends died there,” said Trabeki, who was a member of Tunisia’s special forces 15 years ago and will serve as the Battalion’s translator.

“That hurt me so bad, “Trabeisi added, toting his M-4 rifle in one band and steadily taking drags on his smoke with the other. “I told myself, Get up and do something about this” I told myself, “Let me come back and train again.” This [training] is like déja vu for me.”