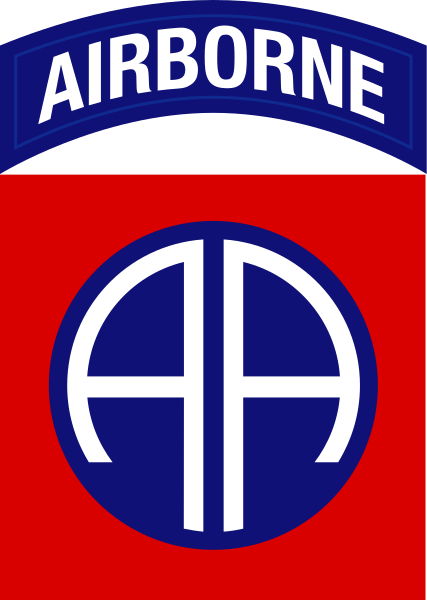 Elements first saw combat in Sicily, when the 505th RCT and part of the 504th dropped behind enemy lines, 9-10 July 1943, at Gela. The remainder of the 504th RCT dropped, 11-12 July 1943, also near Gela, after running friendly naval and ground force fire. Scattered elements formed and fought as ground troops.

The elements were flown back to Tunisia for reequipment and returned to Sicily to take off for drop landings on the Salerno beachhead. The 504th Parachute Infantry dropped, 13 September 1943, and the 505th the following night; the 325th landed by boat. These elements bolstered Salerno defenses and fought their way into Naples, 1 October 1943.

After a period of occupation duty (and combat for some elements in the Volturno Valley and Anzio beachhead), the Division moved to Ireland, November 1943, and later to England, February 1944, for additional training. Moving in by glider and parachute, troops of the 82d dropped behind enemy lines in Normandy on D-day, 6 June 1944, before ground troops hit the beaches.

Cutting off enemy reinforcements, the Division fought its way from Carentan to St. Sauveur-le-Vicomte, fighting 33 days without relief.

Relieved on 8 July, it returned to England for refitting. On 17 September, it was dropped at Nijmegen, 50 miles behind enemy lines, and captured the Nijmegen bridge, 20 September, permitting relief of British paratroops by the British 2d Army.

After heavy fighting in Holland, the Division was relieved 11 November and rested in France.

It was returned to combat, 18 December 1944, to stem the von Rundstedt offensive, blunting the northern salient of the Bulge. It punched through the Siegfried Line in early February 1945, and crossed the Roer, 17 February.

Training with new equipment in March, the Division returned to combat, 4 April, patrolling along the Rhine, securing the Koln area, later moving across the Elbe, 30 April, into the Mecklenburg Plain, where, 2 May 1945, the German 21st Army surrendered.