We Landed on D-Day

The Story of the 2nd Battalion the Devonshire Regiment

At dawn we anchored 7 1/2 miles from the coast, and there passed us a never-ending procession of LCTs, LCT(R), LCT (H), and all types of naval craft, whose job it was to prepare the way for the landing of the infantry. At 0545 hrs we started embarking in LCAs and by 0600 hrs we had taken up our allotted positions in the procession to the shore. The sea was definitely rough and in the LCAs the troops were very sick, in spite of pills which were supposed to be infallible. We could just distinguish ahead the LCAs of the 1st Hamphires making their way past the stationary cruisers and destroyers who were bombarding the shore batteries and defended posts.

Overhead we could see the three layers of fighter cover provided by our Air Forces. It was obvious that no German machine could enter the area and expect to survive. We were, however, listening and watching out for the expected assault by bomber command on the enemy coast positions. Although the clouds were high over the sea, the sky was very dark above the beaches, and we began to wonder whether this part of the programme could be carried out.

The excitement grew, and as we were passing the line of bombardment ships, our rocket landing craft let loose their rockets. The noise of their explosions rolled across the water like thunder. 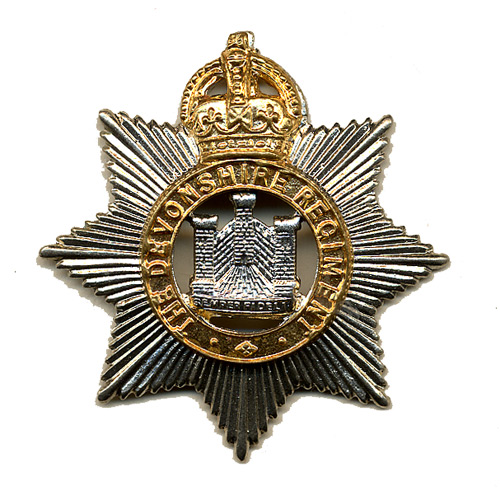 Cap badge of the Devons

The Field Regiments were firing from their landing craft, and by 0750 hrs the leading battalions together with their D D tanks were approaching the beaches. We were in touch with Bde Hq by wireless, but, like them, could get no information on what was going on ahead.

In our ‘run in’ all eyes were glued on the spire of Asnelles church which made an excellent direction mark. When we got to within 300 yards of the shore, we suddenly realised that the bench obstacles had not been destroyed. We could see quite plainly the unpleasant looking mines on top of each post. By this time the tide was so far up that there was no question of grounding below the obstacles. As our speed was reduced to avoid them, so we were driven eastwards by swiftly flowing tide.

The landing craft grounded amid a certain amount of mortar and rifle fire. The ramps were let down, and we jumped into 4 1/2 feet of water. It was very wet, very cold. However, it had its funny side. The bed of the beach was very uneven, presumably as a result of shelling. Wading through the deep and rough water became a task of the first magnitude and, curiously enough led to a. good deal of laughter. Then we were ashore directly in front of a German pill-box; the gun had fortunately been knocked out, and a number of German soldiers lay dead beside it. We found that we had landed near Les Rocquettes.

We expected to see a nice clear beach complete with all the correct signs neatly arrayed pointing the way to our assembly area. A very different picture greeted us. The beach was covered by a swarm of troops lying flat on their faces, ostrich-like, trying to make as small a target of themselves as possible. All was not well.

Of the whole battalion, C Company were the only company to land in the right place, and they found that they were the first troops to land at that particular spot. Major Bubbles Duke, knowing that his objective was Asnelles, decided to attack the eastern edge of Le Hamel, still strongly held by the enemy. It was while carrying out a reconnaissance for this attack that he was killed by a sniper. His death was a bitter blow to every man in the battalion, as his was a personality that inspired us all, and his loss was one that we could ill afford. Mr Arthur Bryant has paid tribute to him in a moving and remarkable article in the “Illustrated London News” of November 9th 1946. 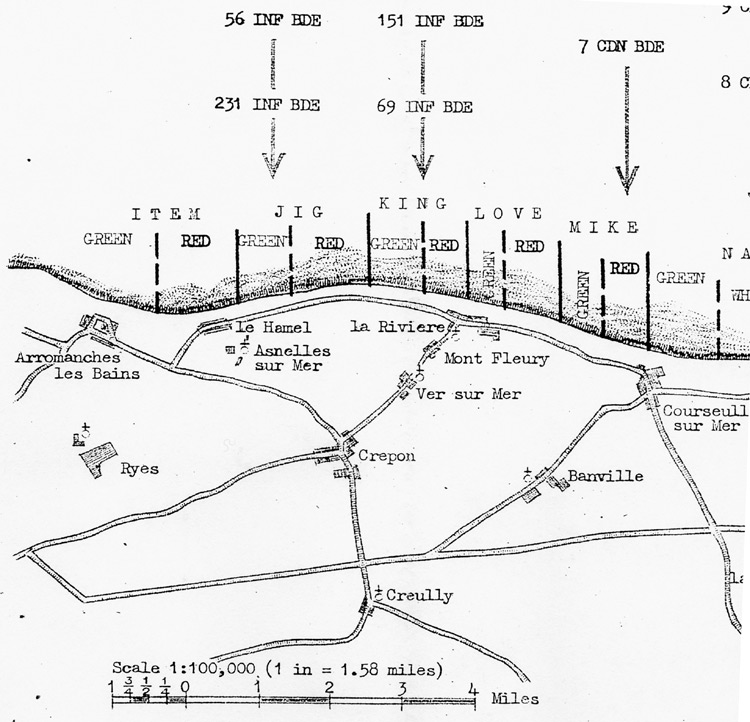 Above: Map of Gold beach sectors and inland villages. Juno beach is partially shown to the right. 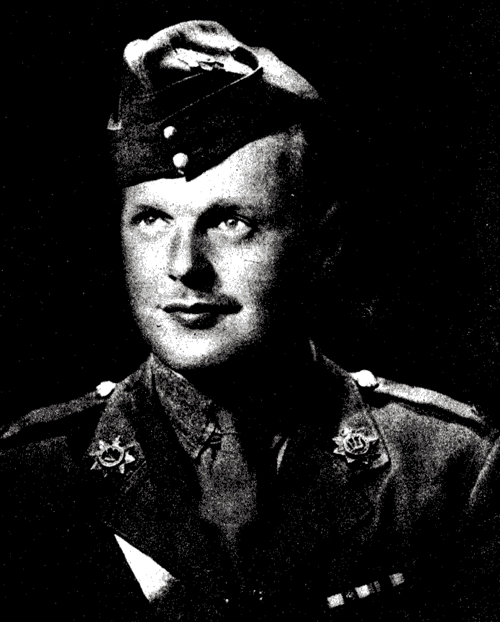 The CO landed in the Dorsets area. This shook him, as of course he should have landed in the Hampshires area. There were no signs of either of the leading companies, so he and his Intelligence Officer, Captain Bill Wood, turned right and walked along the beach towards Le Hamel. A number of tanks were knocked out on the beach, a flail had got about 20 yards through a. minefield, but its track had come off. There was a considerable noise of rifle fire from Le Hamel, and an occasional anti-tank gun opened up. He found the CO of the Hampshires, wounded, lying on the sand, trying to direct an attack on Le Hamel but up till that time no way inland had been found through the minefield.

The CO came across no Devons, so turned eastward along the beach in the hope of finding a gap further along. He met the Brigade Commander who had just landed, and as they were talking, he saw some Dorsets move inland single file through the minefield; he said to the Brigadier: “If I can find any of my chaps, I will bypass Asnelles and go straight for Ryes–anything to get away from this unhealthy beach.” Soon after this, he met Major Frank Sadleir and Major John Parlby. They told him that Major Mike Howard and CSM Bembo had been drowned. This fortunately proved to be untrue, although they were badly hurt, and were sent straight home to hospital.

We decided to keep well east of Asnelles, which was in enemy hands, and to out into La Grande Riviere just south of the village. The route to be followed, however, ran perilously near, and in full view of the enemy MG positions on the high ground overlooking the river from the east.

The battalion left the beaches in single file, along a. narrow footpath the sides of which were supposed to be mined, in the following order; A Coy; followed by advanced battalion HQ; D Coy and B Coy. We suffered casualties from intermittent heavy mortar fire and snipers. As we got nearer to the hill on our left we expected any moment that the enemy would open fire; fortunately for us the enemy were not occupying these positions, so we got away with it. As we moved east into La Grande Riviere, D Coy came under intense mortar fire. Major John Parlby was wounded in the leg, and there wore several other casualties. CSM Bolham was badly stunned but carried on. We had lost three company commanders in three quarters of an hour.

After assembling in the valley just south of Asnelles village the advance continued, and we began to think that we were through the enemy crust and that we should have little difficulty in seizing Ryes. We were wrong. When A Coy reached a point about a 1000 yards north of the village they came under intense LMG and spandau fire at close range from enemy hidden in thick hedges.

This became close fighting with a vengeance; we had no artillery or mortar support as they had not yet landed. The only fire support we had was from our destroyer, and it was not possible to fire naval guns within 1000 yards of our own troops. However, our FOB Capt Dupont, brought very accurate fire to bear on the outskirts of Ryeas.

Every means was tried to dislodge the enemy from the trees and hedges. ‘A’ Coy, gallantly led by Major Frank Sadleir, tried to push on under cover of their 2 inch mortars; ‘B’ and ‘D’ Coys tried to turn the flanks but were held up when crossing the open country. Lieut Smith [this name is a guess, the original is impossible to read with certainity] was killed while leading his platoon; Lieut Bull, Capt Crawley, Lieut Morris and Capt Dupont were all wounded. Lieut Foy and a portion of his platoon were taken prisoners in the melee that ensued.

These operations took time, and time could not be wasted. ‘A’ Coy were left to contain the enemy in the river, while ‘B’ and ‘D’ Coys disengaged in order to continue the advance on Ryes by moving up the main road to the west of La Grande Riviere. This advance was successful and Ryes was captured, after slight opposition was overcome in the streets. By 1600 hrs, the whole battalion had been committed, so it was decided that the advance towards Longues should be postponed until the battalion had re-organized. By 1900 hrs, ‘C’ Coy, having been heavily engaged all day at Le Hamel, joined the battalion and pushed straight on towards Longues to seize the high ground known as Masse de Credaille. This they failed to do, being held up at La Rosiere a mile short of the objective. During the evening, the Bn Mortar platoon, the Anti-Tank platoon and the Carrier platoon arrived complete, having landed successfully during the day. So ended the first day of the battle for Normandy. We had accomplished the first part of our task, and it was with great delight that we heard that the 7th Armoured Division was landing rapidly behind us.

Contrary to expectation, our casualties had on the whole been light. Two officers and twenty other ranks had been killed, while six officers sixty other ranks had been wounded. A certain number were inevitably missing, owing to the disorganisation after landing, but we expected that the majority would re-join on the following day.