Origin of the Korean War

KOREA, like Germany, had been jointly occupied by Soviet and American forces at the end of World War II. The nation had been part of the Japanese empire since 1910, and when Japanese resistance suddenly collapsed in the summer of 1945, the Red Army, which had been planning to invade Manchuria, found the way open into northern Korea as well. The way was also open, in southern Korea, for some of the American troops whose original mission had been to invade the Japanese home islands. The peninsula was occupied, therefore, more by accident than by design: that probably accounts for the fact that Moscow and Washington were able to agree without difficulty that the 38th parallel, which split the peninsula in half, would serve as a line of demarcation pending the creation of a single Korean government and the subsequent withdrawal of occupation forces.

Those withdrawals did take place, in 1948-49, but there was no agreement on who would run the country. Instead it remained divided, with the American-supported Republic of Korea in control of the south by virtue of an election sanctioned by the United Nations, while the Soviet-supported Democratic Republic of Korea ruled the north, where elections were not held. The only thing unifying the country by then was a civil war, with each side claiming to be the legitimate government and threatening to invade the other.

Neither could do so, however, without superpower support. This the Americans denied to their South Korean allies, chiefly because the Truman administration had decided to liquidate all positions on the Asian mainland and concentrate on the defense of island strongpoints like Japan, Okinawa, and the Philippines—though not Taiwan. The South Korean president, Syngman Rhee, repeatedly sought support for his ambitions to liberate the north from officials In Washington, as well as from General Douglas MacArthur, the commander of United States occupation forces in Japan, but he never got it. One of the reasons the Americans withdrew their troops from South Korea, indeed, was their fear that the unpredictable Rhce might “march north,” and thus drag them into a war they did not want.

Rhee’s North Korean counterpart, Kim Il-sung, had similar designs on the south, and for a time a similar experience with his superpower sponsor. He had repeatedly sought support in Moscow for a military campaign to unify Korea, and had been repeatedly turned down—until January, 1950, when yet another request got a more encouraging response. What made the difference, it appears, was Stalin’s conviction that a “second front” was now feasible in East Asia, that it could be created by proxies, thus minimizing the risk to the U.S.S.R., and that the Americans would not respond. They had done nothing, after all, to save tire Chinese nationalists, and on January l2, 1950, Secretary of State Acheson had even announced publicly that the American “defensive perimeter” did not extend to South Korea. Stalin read the speech carefully—as well as (courtesy of British spies) the top-secret National Security Council study upon which it was based—and authorized Ills foreign minister, Molotov, to discuss it with Mao Zedong. The Soviet leader then informed Kim Il-sung that “[a]ccording to information coming from the United States, . . . [t]he prevailing mood is not to interfere.” Kim in turn assured Stalin that “[t]he attack will be swift and the war will he won in three days.”

Stalin’s “green light” to Kim Il-sung was part of the larger strategy for seizing opportunities in East Asia that he had discussed with the Chinese: shortly after endorsing the invasion of South Korea, he also encouraged Ho Chi Minh to intensity the Viet Minh offensive against the French in Indochina. Victories in both locations would maintain the momentum generated by Mao’s victory the previous year. They would compensate for the setbacks the Soviet Union had encountered in Europe, and they would counter increasingly obvious American efforts to bring Japan within its system of postwar military alliances. A particular advantage of this strategy was that it would not require direct Soviet involvement: the North Koreans and the Viet Minh would take the initiative, operating under the pretext of unifying their respective countries. And the Chinese, still eager to legitimize their revolution by winning Stalin’s approval, were more than willing to provide backup support, if and when needed.

These were the events, then, that led to the North Korean invasion of South Korea. What Stalin had nor anticipated was the effect it would have on the Americans: this unexpected attack was almost as great a shock as the one on Pearl Harbor nine years earlier, and its consequences for Washington’s strategy were at least as profound. South Korea in and of itself was of little importance to the global balance of power, but the fact that it had been invaded so blatantly—across the 38th parallel, a boundary sanctioned by the United Nations—appeared to challenge the entire structure of postwar collective security.

It had been just this sort of thing that had led to the collapse of international order during the 1030s, and to the subsequent outbreak of World War II. Truman hardly needed to think about what to do: “We can’t let the UN down,” he repeatedly told his advisers. It took his administration only hours to decide that the United States would come to the defense of South Korea, and that it would do so not just on its own authority, but under that of the United Nations as well. 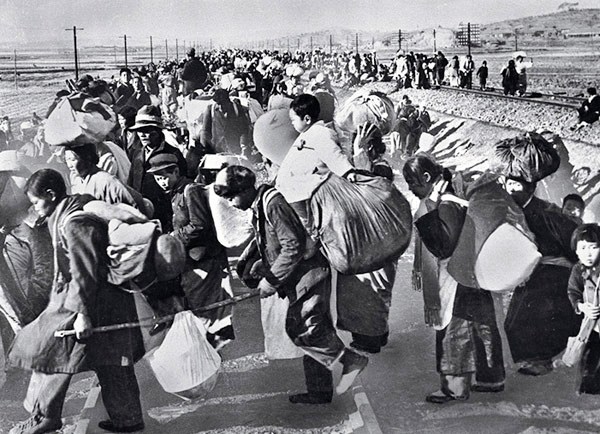 Hundreds of thousands of Koreans fled south in mid-1950 after the North Korean army struck across the border. Rumors spread among U.S. troops that the refugee columns harbored North Korean infiltrators.

It was able to do so quickly for two reasons. The first was that an American army was conveniently stationed nearby, occupying Japan—a fact Stalin seems to have overlooked. The second—another oversight on Stalin’s part—was that there was no Soviet representative present in the Security Council to veto United Nations action: he had been withdrawn, some months earlier, as a protest against the organizations refusal to seat the Chinese communists. With U.N. approval, then, the international community mobilized within days to counter this new threat to international security, yet another response that Moscow had not anticipated.

The response, to be sure, almost failed: American and South Korean troops were forced to retreat to the southeastern tip of the Korean peninsula and might have had to evacuate it altogether had it not been for a brilliant military maneuver by the United Nations commander, General MacArthur, who surprised the North Koreans with a daring amphibious landing at Inchon, near Seoul, in mid-September. Soon he had trapped the North Korean army below the 38th parallel, and his forces were advancing almost unopposed into North Korea. Shocked by this sequence of events, Stalin was on the verge of accepting a lost war, even the prospect of the Americans occupying North Korea itself, which directly bordered on China and the Soviet Union: “So what,” he commented wearily. “Let it be. Let the Americans he our neighbors.”

There remained, though, the question of what the Chinese would do. Mao had supported the invasion of South Korea, and even before the Inchon landing—which he anticipated and warned Kim Il-sung to be ready for—he had begun moving troops from the China coast opposite Taiwan up to the North Korean border. “We should not fail to assist the Koreans,” he told his advisers early in August. “We must lend them our hands in the form of sending our military volunteers there. ” There was concern in Washington about the possibility of Chinese intervention, and for that reason Truman ordered MacArthur not to advance all the way to the Yalu River, which formed the Sino-Korean border. Meanwhile the State Department, through various intermediaries, was seeking to deter the Chinese by raising the prospect of horrendous casualties. Mao for a time had difficulty convincing his own advisers that it would be necessary to intervene, a fact that led Stalin, early in October, to tell Kim Il-sung that he would have to evacuate North Korea altogether. Shortly thereafter, though, Mao prevailed, and so was able to inform the Russians and the North Koreans that the Chinese would be soon corning to the rescue.

Thus it happened that, at the end of November, 1950, two armies once again confronted one another across a river—with a wariness that this time failed to dissolve into cheers, handshakes, drinking, dancing, and hope. “I thought we’d won the war!” an American army officer recalled. “Thanksgiving Day came and we had all of the food . . . that Thanksgiving had meant when we were at home. . . . [A]t that time [we] were nearing the Yalu River and that meant going home.” In this case, though, the army on the other side of the river had other ideas. “[W]e shall aim,” its commander, Mao Zedong, had explained to Stalin, “at resolving the [Korean] conflict, that is, to eliminate the U.S. troops within Korea or to drive them and other countries aggressive forces out.” On November 26th, some 300,000 Chinese began to make good on this pledge with bugles blowing, human wave attacks, and all the advantages of surprise. Two days later MacArthur informed the Joint Chiefs of Staff: “We face an entirely new war.”