Note: Cantigny was (and is, in Illinois) pronounced “Can-teeny” by the Yanks.

Also note: America had lost her first war dead in the Fall prior to the battle of Cantigny. Corporal James B. Gresham and Privates Thomas F. Enright and Merle D. Hay, all of the 16th Infantry, 1st Division, lost their lives when the German troops raided the American trenches at Bathelémont on November 2, 1917. (from American Armies and Battlefields in Europe, Chapter XIV, “Interesting Facts and General Information Concerning the American Expeditionary Forces”, page 503.) 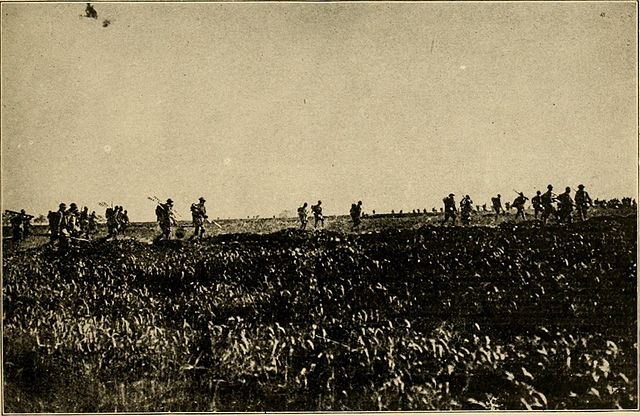 For more on the 1st Division in World War I, see The Red One.

During the emergency created by the German offensive of March 21, General Pershing placed all American combat troops then in Europe at the disposal of General Foch. Among these units was the 1st Division which on April 5 was moved to the region north of Paris, and on April 27 was given command of a sector west of Montdidier as part of the VI Corps of the French 1st Army. This marked the first entry into line of an American division on an active battle front. At that time the Germans were in the midst of their series of great offensives and there was a possibility that the next attack might include the 1st Division sector.

The activity and firing on this front were so great that it was only with difficulty that any semblance of a defensive position could be prepared. The most prominent feature of the German lines facing the 1st Division was the high ground on which Cantigny is located. Not only did it furnish excellent positions from which the Germans could observe the American sector, but it also served as a screen for hostile movements and other activities in its rear.

Early in May the command of the division was transferred to the French X Corps and about the middle of the month it was decided to dislodge the Germans from their positions near Cantigny, in order to reduce the difficulties of holding the front line in the vicinity of that place.

The 28th Infantry of the 1st Division was selected to carry out the attack and for several days rehearsed its plans over similar terrain in the rear area. During the attack the regiment was supported by American and French artillery, machine gun, Stokes mortar, 37.mm. gun, tank, flame-throwing and engineer units and two companies from the 18th Infantry.

The assault was launched at 6:45 a.m. on May 28 and in spite of heavy resistance mainly beyond the town and severe artillery and machine-gun fire from the left flank all objectives were soon gained. The construction of trenches, the laying of barbed wire and the preparation of strong points on the newly captured ground were promptly started by the American troops concerned.

The German reaction was immediate and unusually violent, indicating a desire to shatter American morale. Counterattack after counterattack was launched against the newly-won positions during the next two days, and starting about noon on May 28 the American lines around Cantigny were subjected to an intense 72-hour bombardment from hostile guns of all calibers.

At the end of that time the Americans still held every inch of ground they had gained and the Germans were compelled to accept defeat.

During the defence against the German counterattacks the two companies of the 18th Infantry in reserve and one company of the 26th Infantry were placed in the front lines.

The capture of Cantigny was the first large offensive operation by an American division. It was considered a brilliant exploit and was particularly gratifying to the Allies as it furnished a concrete example of the fighting ability of American troops, who were then beginning to arrive in France in large numbers.

As this engagement occurred the day after the great German offensive of May 27 broke through the French lines at the Chemin des Dames, it was a very bright spot for the Allies in an otherwise gloomy situation.

The 1st Division on, June 2 took over additional frontage in order to release French troops for service elsewhere. North of Cantigny the front line was advanced slightly on June 3 to a more advantageous location. During June 9 the division was subjected to a severe artillery bombardment, as on that day the Germans launched their great offensive between Montdidier and Noyon, which was just east of the sector occupied by the troops of the 1st Division.

The division remained in line a total of 73 days and suffered almost 5,200 casualties. It was relieved on July 8, and ten days later played an outstanding role in the counteroffensive south of Soissons against the Aisne-Marne salient. This battlefield of the 1st Division may be conveniently visited by automobile from Paris or by taking a train to Montdidier (54 miles from Paris) or to Amiens and hiring an automobile at either place.

The United States Government has constructed in a public square at Cantigny a small but appropriate monument to commemorate the first large offensive action by an American division which took place during the World War.

The monument consists of a shaft near the upper four corners of which are American eagles. A row of stars encircles the top and on the sides are carved, in French and English, the following inscriptions: