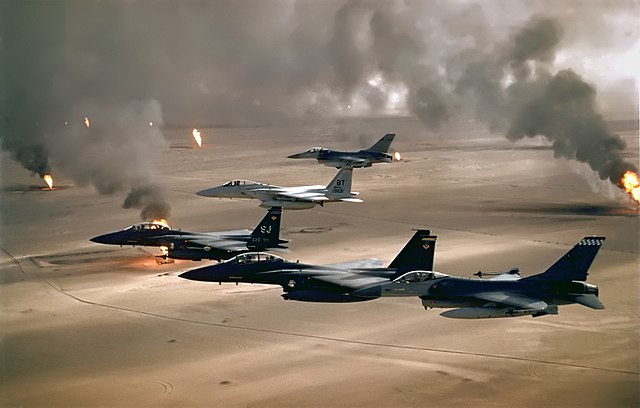 29 November 1990—UN authorizes any force necessary to remove Iraqi forces from Kuwait. Iraqis are given to 15 January to leave Kuwait.

28 February 1991—After 100 hours, Iraq agrees to a ceasefire. Iraqi forces have retreated from Kuwait. The United States (under the leadership of President George H.W. Bush, Defense Secretary Dick Cheney and Chairman of the Joint Chiefs Colin Powell) is satisfied with U.N. objectives and does not push on to Baghdad. Within Iraq, Saddam brutally crushes Shi’ite and Kurdish opposition.

Key Dates: From the end of the First Gulf War to the beginning of the second

April 3, 1991—The Security Council passes Resolution 687, allowing Saddam to stay in power but demanding he destroy all weapons of mass destruction. Until he does, economic sanctions are to remain in place. Iraqi officials begin hiding weapons and data.

January. 26, 1998—After nearly seven years, Iraq has not disarmed and continues to obstruct the disarmament process. On this date, Donald Rumsfeld, Paul Wolfowitz and others send an open letter to Clinton calling for him to prevent the spread of weapons of mass destruction.

December 2, 1999—In a New Hampshire primary debate, George W. Bush is asked about Saddam. Bush responds, “If I found out he was developing weapons of mass destruction, I’d take him out.” After taking office, Secretary of State Powell tries to develop “smart” U.N. sanctions.

September 15, 2001—President Bush signs a directive for the Afghan campaign and instructs the Pentagon to develop plans for a possible war in Iraq.

January 29, 2002—In his State of the Union speech, Bush calls Iraq, North Korea and Iran an “axis of evil” and says, “I will not wait on events, while dangers gather.” In the next few months Bush will tell Condoleeza Rice to begin planning a strategy for Iraq, and General Tommy Franks begins giving monthly briefings to Bush on plans to topple Saddam.

June 1, 2002—Addressing graduates at West Point, Bush declares that America should be ready to use pre-emptive action against possible threats.

September 12, 2002—President Bush addresses the U.N. General Assembly and challenges it to hold Iraq to its promise to disarm. The following week the Administration discusses possible resolutions and stresses that Iraq will have “days and weeks, not months,” to comply.

October 10, 2002—Congress authorizes Bush to use force against Iraq.

November 8, 2002—After two months of diplomacy and three proposals, the Security Council passes Resolution 1441 by a 15-to-0 vote. The first UNMOVIC teams arrive in Baghdad 17 days later. Iraq does not give inspectors full cooperation and refuses to acknowledge stockpiles of chemical weapons.

January 19, 2003—Hans Blix, chief weapons inspector for the UN, carries a message to Saddam Hussein warning him of the “seriousness of the situation”. Blix states, “Inspection is not a prelude, it is an alternative to war, and that is what we want to achieve.” But, Blix, adds, “There has not been sufficient co-operation. They need to have a sincere and genuine co-operation.”

Meanwhile, tens of thousands of protestors took to the streets around the world to show their support for the dictator of Iraq. This was not lost on Saddam. “They are supporting you because they know that evil-doers target Iraq to silence any dissenting voice to their evil and destructive policies,” Saddam told senior military officers and his son Qusay, commander of Iraq’s elite Republican Guards, Reuters reported.

February 5, 2003—In an address to the Security Council, Colin Powell presents the case for force against Saddam Hussein’s regime. America’s former allies are unmoved.

March 5, 2003—More than 200,000 U.S. troops, five carrier groups and 1,000 aircraft are in place or en route to the Middle East. France and Russia pledge to veto any resolution authorizing force. Two days later, the British begin a final effort at diplomacy.

March 16, 2003—Bush, Blair and Spanish Prime Minister José María Aznar convene for a summit in the Azores. They announce the next day will be the Security Council’s last chance to act. The Council does nothing.

March 17, 2003—President Bush issues an ultimatum to Saddam, giving him 48 hours to leave the country or face war.