19 March 2003: ‘Decapitation attack’: U.S. and coalition forces launched missiles and bombs at targets in Iraq Wednesday night, including a “decapitation attack” aimed at Iraqi President Saddam Hussein and other top members of the country’s leadership.

A British official told CNN Iraq launched as many as 10 missiles into Kuwait. Two were intercepted by Patriot missiles, U.S. military officials said.
Iraqi officials on Iraqi television said 72 missiles hit Baghdad, killing “four Iraqi fighters” and an officer. U.S. officials said more than 60 cruise missiles have been fired at targets in and around Baghdad since Operation Iraqi Freedom began. 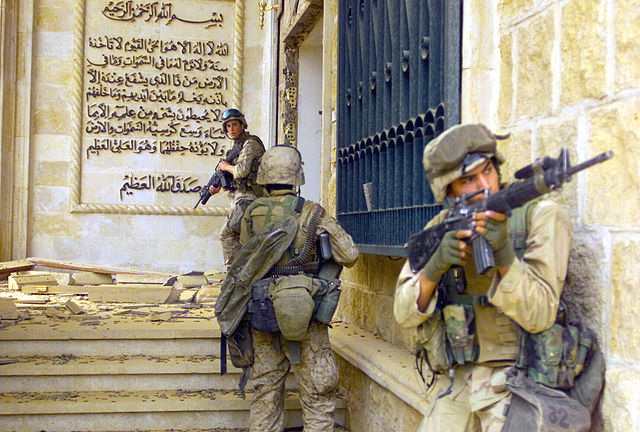 US Marines Corps (USMC) Marines from the 1st Battalion, 7th Marines (1/7), Charlie Company, Twentynine Palms, California (CA), cover each other with 5.56 mm M16A2 assault rifles as they prepare to enter one of Saddam Husseins palaces in Baghdad as they takeover the complex during Operation Iraqi Freedom.

Pentagon officials said they believe Saddam Hussein escaped air attacks so far, but some of his “senior leadership” might have been killed, perhaps as they slept.
The “shock and awe” phase of the U.S.-led war against Iraq has been put on hold while the military assesses the state of the Iraqi leadership after initial air strikes, Pentagon officials said.

With U.S. soldiers less than 60 miles from Baghdad, coalition planes and helicopters pounded Iraqi positions to clear a path toward the capital.

25 March 2003: U.S.-led coalition forces killed an estimated 150 to 200 Iraqis Tuesday in a land battle — possibly the biggest firefight of the war — in the Euphrates Valley east of Najaf, Pentagon officials said. British troops turned back a “battalion-sized” counterattack by Iraqi forces Tuesday southeast of Basra and destroyed about 20 armoured vehicles, a British military spokesman said. 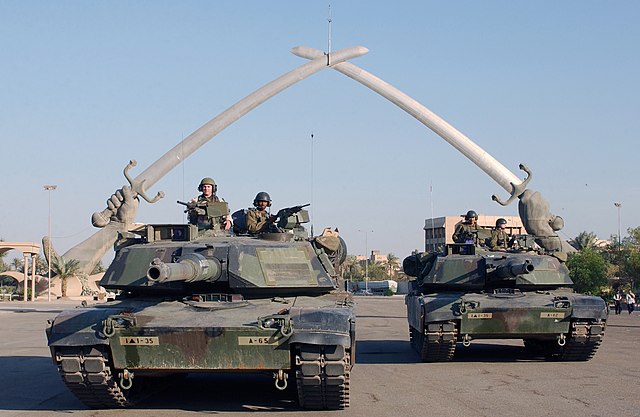 The body of Ali Hassan al-Majeed, the first cousin of Iraqi President Saddam Hussein known as “Chemical Ali,” has been found in Basra, a British military spokesman said.

A unit called the 1st Battalion Free Iraqi Forces, made up of 700 troops, began deployment near Nasiriya Monday. The unit is associated with Iraqi National Congress, an Iraqi opposition group, according to U.S. Central Command.

26 March 2003: In a move that appeared to be the precursor to opening a northern front, about 1,000 U.S. paratroopers parachuted into a Kurdish-controlled area early Thursday local time. The paratroopers, from the U.S. Army’s 173rd Airborne Brigade, secured an airfield for coalition use. Securing the airfield will allow more coalition troops and armor to be brought in, as well as humanitarian supplies.

Scores of coalition soldiers were dropped deep into Iraq Friday in what is being called the longest helicopter-borne air assault operation ever.

29 March 2003: U.S. Marines and Iraqi fighters faced off on either side of the Euphrates River on Saturday, waging a fierce battle for the city of Nasiriya.

30 March 2003: The U.S. stepped up airstrikes against Republican Guard troops in one of the heaviest days of bombing in the 11-day war. Pentagon sources say about 800 strike sorties were flown Sunday, with more than 60 percent aimed at troops south of Baghdad.

On the media front, US newsman Peter Arnett told Iraqi TV in an interview that U.S. war planners underestimated Iraqi forces and are now re-writing battle plans. Public outcry led to his firing.

1 April 2003: In the beginning of the battle of Baghdad, U.S. forces have started a major ground offensive against at least two Republican Guard divisions — the Medina and Baghdad — south of the Iraqi capital. U.S. forces are engaging Iraqi Republican Guard troops in a major fight in Karbala, according to a Pentagon official.

Weapons and equipment of the U.S. 4th Infantry Division docked Tuesday in Kuwait City. Approximately 5,000 soldiers from the division, based at Fort Hood, Texas, began flying into a Kuwait air base late last week.

U.S. Central Command announced that Army Pfc. Jessica Lynch, 19, who was listed as missing after an ambush near Nasiriya March 23, has been rescued inside Iraq.

U.S. Marines in Nasiriya are going block-by-block to flush out Iraqi paramilitary units.

The 3rd Infantry Division pushed through the Karbala Gap on Thursday as soldiers with the division’s 3rd Squadron, 7th Cavalry Regiment and the 3rd Brigade Combat Team continued a relentless assault.

The 1st Battalion of the 7th Marines secured two sites Thursday on the outskirts of Kut, an ancient city whose location on the Tigris River about 40 miles south of Baghdad makes it strategically important. The two locations were a suspected Republican Guard post and an Iraqi air base.

Some 2,500 Iraqi soldiers with the Republican Guard’s Baghdad Division have surrendered to U.S. Marines between Kut and Baghdad, said Capt. Frank Thorp, a spokesman for U.S. Central Command.

Kurdish forces captured the town of Khazar in northern Iraq Friday after more than a day of fighting.

The U.S. Army’s V Corps moved into the Iraqi capital from the south, and the 1st Marine Expeditionary Force came in from the southeast, U.S. officials said. The 1st Batallion, 7th Marines, were approaching Baghdad’s eastern suburbs Saturday.

6 April 2003:  U.S.-led coalition forces encircled Baghdad Sunday, closing off highways in and out of the Iraqi capital while armed Iraqi soldiers manned the streets and hunkered down for battle.

A C-130 Hercules transport plane brought troops and equipment to Baghdad’s airport under the cover of darkness Sunday, the first coalition aircraft to put down at the facility since the U.S. Army took it over.

7 April 2003:  The U.S. military bombed a building in Baghdad Monday based on information that senior Iraqi officials were there, U.S. officials said.

Iraq’s Information Minister Mohammed Saeed al-Sahaf stood in the streets of Baghdad Monday morning amid the U.S. raid on the capital, issuing denials of coalition advances.

British forces made their largest incursion into Basra on Monday, setting up a base inside in Iraq’s second-largest city.

The body of Ali Hassan al-Majeed, the first cousin of Iraqi President Saddam Hussein known as “Chemical Ali,” has been found in Basra, a British military spokesman said.

A unit called the 1st Battalion Free Iraqi Forces, made up of 700 troops, began deployment near Nasiriya Monday. The unit is associated with Iraqi National Congress, an Iraqi opposition group, according to U.S. Central Command.

8 April 2003: As the war reached a three-week mark, coalition forces were moving “at will” within and around Baghdad, Pentagon officials said, describing the capital city as isolated. Pockets of military resistance from Saddam Hussein’s regime remain, they said.

In southern Iraq, British troops are in control of 80 percent of Basra, the country’s second-largest city, a UK military spokesman at Central Command said early Wednesday. Small pockets of resistance remain, said the spokesman, who acknowledged reports of looting in Basra.

U.S. Special Forces are fighting to seize a strategic highway linking the northern Iraqi cities of Mosul and Kirkuk. The strategy is to cut off and isolate the cities, rather than going into them. 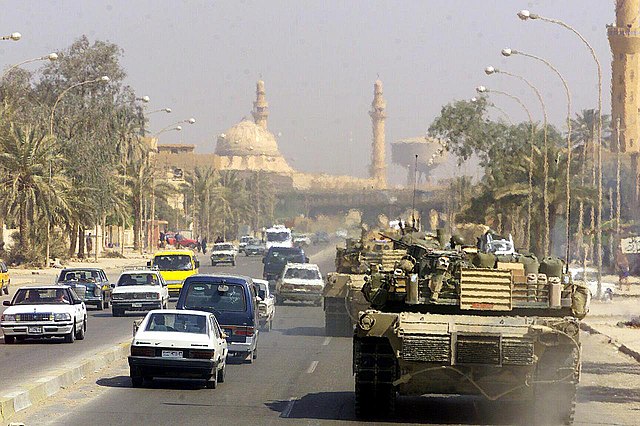 9 April 2003: After days of coalition bombing, hundreds of jubilant Baghdad residents took to the streets Wednesday, tearing down posters of Saddam Hussein and looting government buildings. U.S. Marines helped topple a statue of Saddam and a Shiite Muslim leader told a group of people in Saddam City, a Shiite neighbourhood, “The tyrant of the world is finished, thanks to the coalition.”

U.S. Marines in tanks rolled into Baghdad’s Firdos Square, just outside the Palestine Hotel in the city’s central district, and took up positions on Wednesday. A senior U.S. Army officer told CNN “the majority of Iraqi forces [in the Baghdad area] have now given up.”

A U.S. Marine column moving into Baghdad from the east came under heavy fire Wednesday afternoon at Baghdad University after being greeted by cheering Iraqis earlier in the day.

10 April 2003: Elements of the 173rd Airborne Brigade moved into Tikrut. The move came after the Kurdish population overtook the city.

A suicide bomber with explosives strapped to his body blew himself up at a Marine checkpoint in Baghdad late Thursday, wounding four Marines, U.S. military officials said. U.S. Capt. Joe Plenzler, with the 1st Marine Division, said the four Marines have been evacuated, but their conditions were not immediately known.

Units with the 101st Airborne attacked remaining pockets of resistance in Hillah overnight, encountering ambushes by Iraqi fighters armed with rocket-propelled grenades. The units overcame the Iraqi resistance and found artillery and air defense systems as well as a warehouse full of food.

11 April 2003: Australian Special Forces intercepted a bus on a road heading west out of Iraq carrying a large group of males attempting to leave the country, according to Gen. Peter Cosgrove of the Australian Defense Forces. There were 59 men on the bus along with roughly $600,000 and documents that included a letter which advised more money would be paid if Americans were killed, Cosgrove said.

Coalition forces battled serious Iraqi resistance Friday at a town near the Syrian border that at one time may have been a key site for Saddam Hussein’s nuclear program.

An cease-fire was signed by the commander of the Iraqi army’s 5th Corps in Mosul with U.S. Special Forces, U.S. Central Command said Friday.

12 April 2003: Elements of the U.S. 1st Marine Expeditionary Unit left Baghdad Saturday for Saddam Hussein’s hometown of Tikrit, one of the only Iraqi cities not under coalition control.

Gen. Tommy Franks said Sunday the Saddam Hussein government in Iraq is now an “ex-regime,” but stopped short of declaring victory. Iraq’s army has been “destroyed” and “there is no regime command and control,” but resistance from militia and foreign fighters remain, he said.

14 April 2003: While some fighting in Iraq continues, the major battles appear to be over, a Pentagon spokesman said Monday, just over a month after the start of the military campaign to topple the regime of Saddam Hussein.

U.S. Marines attacked Saddam Hussein’s hometown of Tikrit Monday in what the U.S. Central Command called the “only significant combat action” in the past 24 hours. Opposition in the city proved “lighter than we expected,” Brig. Gen. Vincent Brooks said. By day’s end, many Marines had switched to cleanup mode, setting up checkpoints and patrolling the city and its suburbs.

1 May 2003: Just 43 days after announcing the start of the war in Iraq, President George W. Bush on Thursday told the nation that “major combat operations in Iraq have ended.” He said the toppling of Saddam Hussein’s government was “one victory in a war on terror that began on Sept. 11th, 2001, and still goes on.” He spoke from the deck of the aircraft carrier USS Abraham Lincoln.