Harvey S. Olson may have been the first soldier to land by sea on French soil the morning of D-Day. Before dawn, he and three other commandoes of the 4th Cavalry swam ashore on St. Marcouf island off Utah beach. Later in the day, he and his comrades were among the first to link up with the airborne troops fighting inland from Utah.

The article below was written by Shane Olson, Harvey’s great-nephew. Shane says, “”I am very proud of my Uncle Harvey for the nearly countless times that he almost gave the supreme sacrifice, as well as Harvey’s father, who was also my Great Grandpa Herbert, who nearly died at St. Mihiel, France in WWI and Harvey’s brothers Ivan and Lloyd, my Grandpa Luverne who fought in other battles, so that we can remain free. Because of them, and my other Grandpa, Richard “Dick” Weiler, who was a medic with the 381st Infantry of the 96th Division, who nearly lost his life on Okinawa, I am devoted to the Sons of American Legion and getting Harvey’s story told.”

At 4:30 AM on D-Day, Corporal Harvey S. Olson, Private Tommy Killeran, Sergeant John W. Zanders and Corporal Melvin F. Kenzie of the 4th Cavalry swam ashore on the Iles St. Marcouf. On the left is the actual newspaper clippings from the 1944 Lake Bronson Budget. Below is the overall account of the action from Utah Beach to Cherbourg.

The Seaborne Assault: Task U Moves In

While parachutists attempted to assemble in the labyrinth of the Normandy hedgerows and marshes, troops aboard transports prepared to transfer into landing craft for the assault on the beach. At 0430 (H minus 2 hours) detachments of the 4th and 24th Cavalry Squadrons under Lt. Col. E. C. Dunn landed on the Iles St. Marcouf to capture what was suspected to be a hostile observation post or casemate for mine-field control. Prior to the landing four men armed only with knives swam to what was supposedly an enemy-held shore to mark the beaches. No enemy was encountered, although both islands were found to be heavily mined and some casualties were suffered. All elements of the detachment (numbering 132 men) were ashore and the island occupied by 0530.

In 1996 Harvey Olson, of Lake Bronson, Minnesota was interviewed by the Karlstad North Star News and he talked about one of his buddies Tommy Killeran. They volunteered for a hazardous mission, in which they practiced with the Navy.

Day after day, they were taken out several miles, by what Harvey referred to as a real “hot shot Navy man” and dumped off the boat to swim to mock up beaches in preparation for when the D-Day invasion would take place. He talked about going ashore with only a knife and flashlight and the first man he saw killed that morning after Harvey handed him a rifle. His name was John Onken.

In Columbia, S.C., as a part of the 4th Cavalry reunion at Ft. Jackson in 1994 in commemoration of the 50th Anniversary of the D-Day Invasion, a plaque and a tree was planted at Heise Pond in honor of these “4 Horsemen”. Here is what the inscription on the plaque reads:

Dedicated to the memory of the first Americans to land on French soil, D Day, June 6, 1944.

These four brave men swan ashore at 0430 (2 hours before the invasion) armed only with knives to secure and mark the beaches for the landing of troops on the St. Marcouf Islands. These islands had to be secured before the landings at Utah Beach could begin at 0630.

Later that morning Harvey fought at Utah Beach and was one of the 4th Cavalry troops to link up with the 82nd Airborne. He talked about this fact in his 1996 North Star News interview. Harvey was always at the frontlines because after carrying out his first mission on D-Day, he was attached with the 82nd and 101st Airborne Divisions throughout the rest of the war in battles such as Hurtgen Forest, the Battle of the Bulge and crossing the Rhine River into Germany. Harvey was awarded the Purple Heart at the battle of Mortain and at the battle of Vielldieu from grenade shrapnel with Oak Leaf Clusters for wounds received.

All of these were at the very frontlines,  all major battles in the European Theater of WWII. After the war, he returned home, but then volunteered and fought with the 8th Ranger Battalion in Korea, which Harvey said had heavy causalities and later joining a tank outfit. After the Korean War he became an MP until his retirement. 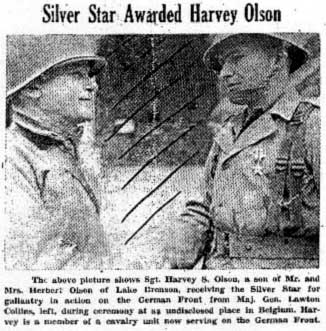 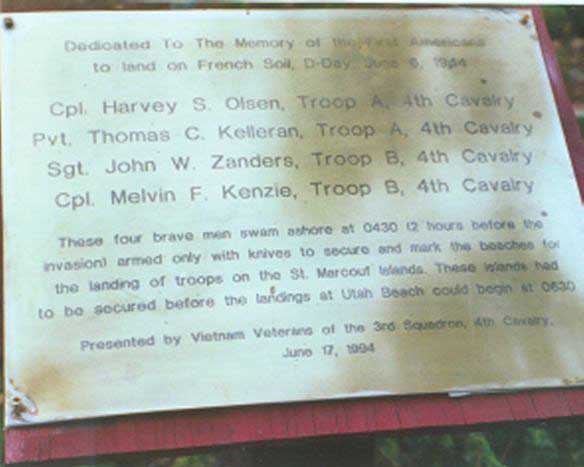 On June 6, 1944, Sgt. Olson with one companion, displaying the highest courage in the face of unknown dangers, became one of the first American

Soldiers of the ground forces to land on French soil. He volunteered for the mission of the landing on D-DAY on the …..(should read Iles St Marcouf) a strategically placed island commanding the beach where assault was to be made. Sgt. Olson and his companion paddled through heavy surf and mined waters in a small two-man rubber boat to within 100 yards of the island.

Sgt. Olson then destroyed his craft by slashing it open, and swam the remaining distance armed only with a knife. Once on the island, which was heavily covered with anti-tank and anti-personnel mines, Sgt. Olson and his companion signaled the assault forces and marked the beach with lights. The skill and courage with which he carried out his hazardous assignment, made possible the successful landing on schedule of his detachment; denying the use of the island to the enemy. This was a vital factor in the opening phase of fortress Europe.

Harvey retired from the Army in 1963. He lived in Lake Bronson, MN, with his wife Arlet until his death on September 6, 2002, after a long battle with failing health.

My Uncle Harv should have his own little corner in the Education Center of the D-Day Memorial as well as the D-Day Museum in New Orleans along with the thousands of stories and displays! 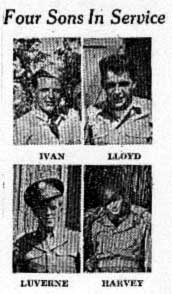