SUMMARY OF REGIMENTAL SITUATION ON D-DAY

The 16th Infantry landed on beach OMAHA, FOX GREEN, and EASY RED with two BLTs abreast; the 2nd BLT on the right (EASY RED) and the 3rd BLT on the left (FOX GREEN).

The 1st BLT, initially in reserve, landed on beach EASY RED behind the 2nd BLT. (For boundaries between Battalions, Zones of Actions, Objectives and BLT troops, see F.O. # 5, Headquarters, 16th CT dated May 1944.) 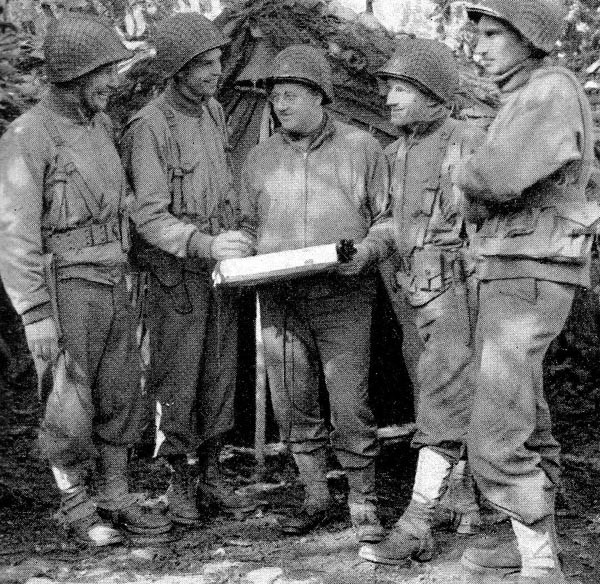 The 2nd BLT was landed at 0630 on 6 June 1944 with Companies E and F abreast; Company E on the right at beach EASY RED, between COLLEVILLE SUR MER and ST LAURENT SUR MER.  *1*  The failure of the LCT (R)’S (Naval Rocket Craft) prearranged Naval and Air missions to hit their assigned targets, coupled with the failure of “DD” tanks to function as planned, caused the 2nd BLT to land under the most adverse circumstances.

About 300 yards off the beach, the landing craft came under withering artillery, MG, and mortar fire. The companies were not landed in an organized manner but were landed to the left of their assigned sectors in a disorganized condition. This was due mainly to the loss of key officers and enlisted personnel from enemy fire while trying to reach the beach.

The assault companies were pinned down on the beach and the reserve company, Company G, 16th Infantry, having landed at H+30 minutes under intense enemy fire, was able to penetrate to the high ground overlooking the beach.

The 3rd BLT with Companies I and L abreast, Company L on the right was scheduled to land at 0630 hours on beach FOX GREEN which was south and to the east of COLLEVILLE SUR MER. However, the touchdown was delayed one half hour due to weather conditions. Company L was forced to take over the mission of Company I as the Navy had taken Company I off course and had nearly landed them in the vicinity of PORT EN BESSIN. The 3rd BLT was disorganized after reaching the beach due to losses of key officers and enlisted men from the withering artillery, mortar, and MG fire. The battalion was forced to fight in a piecemeal action during the morning and it was not until late afternoon that the battalion was able to be organized as such in the vicinity of LE GD HAMEAU.

The last BLT started landing at H+70 minutes on beach EASY RED under intense enemy artillery and MG fire from the high ground to their front and right flank. They were able, however, to follow through the gap made by Company G, and gradually to clean the high ground overlooking the beach of enemy. They were then given the mission originally assigned to the 2nd BLT.

Cannon Company lost all six of its 105 Howitzers (M-3), which were loaded in DUKWS, through sinking and fought as infantrymen with the 1st BLT.

Anti-Tank Company 16th Infantry was unable to get any of its guns from the beach before late afternoon of D-Day due to the fact that the beach Exits were still being covered by enemy artillery and MG fire.

The 7th FA Battalion did not get their guns to shore according to plan until about 1400 hours D-Day, and lost seven out of 12 guns when their DUKWS sank.

The 62nd FA Battalion did not arrive on the beach until about 1800 hours D-Day as they were loaded on LCTs and were unable to beach due to heavy artillery fire which covered the beach continually.

The Advance CP CT 16 which landed at H+50 minutes was unable to function as all communication equipment was either lost or destroyed by enemy action and key personnel killed, including the Regimental Executive Officer.

The Regimental CP CT 16 landed at H+110 minutes and was immediately subjected to enemy artillery, MG, and small arms fire. Reorganization was instigated immediately by the Regimental Commander and the beaches were rapidly cleaned of personnel through the one gap available on EASY RED.

The 3rd BLT held positions to the east and south of LE GD HAMEAU.

In the meantime, the 18th Infantry had been assigned the original objective of the 1st Battalion, 16th Infantry and had pushed south of COLLEVILLE SUR MER, but left snipers and isolated groups of enemy in their wake which had to be cleaned out.

The 26th Infantry CT, having landed at about 1830 hours, the 1st Battalion was attached to the 16th CT and was assigned the mission of securing the high ground about 1000 yards to the south of LE GD HAMEAU and to gain and maintain contact with the 3rd BLT 16th Infantry at LE GD HAMEAU and with the 2nd BLT 16th Infantry south of COLLEVILLE SUR MER. This was done and the regimental sector was tied in for the night of 6-7 June 1944.

The enemy situation on the regimental front on D-Day was as follows:

During the first two days of the landing it became apparent that the advance intelligence information relative to the enemy’s disposition and defensive installations was highly accurate. The 1st Battalion of the 726th Infantry was in position with the 3rd Company in the COLLEVILLE-ST HONORINE area, and the 4th Company at PORT EN BESSIN. The other two companies of the battalion were in position east of PORT EN BESSIN.

The most discouraging feature of the landing was the fact that the 352nd German Infantry Division was holding maneuvers on the beach on the day of the landing. Thus, instead of just two companies to face the regiment, it was faced with two additional battalions.

Prisoners from the 352nd Artillery Regiment were also captured. A map found in a pillbox at Exit E-3 on D-Day disclosed locations of all the guns of the 352nd Infantry Division, observation posts, battalion, regiment and division command posts. This map was rushed to Headquarters, Division Artillery and fire was placed on all installations noted on the map early on D+1. As a result of the naval and artillery fire on these positions, enemy artillery fire on D+1 became inaccurate and was apparently fired from maps, the OP’s having been knocked out. In addition, a bombing mission was placed on the 352nd Division’s CP shown on the captured map and direct hits were observed in the midst of an area in which numerous staff cars were located.

During the first day approximately 120 prisoners were taken and a like number on D+1. All prisoners talked freely and gave such information as they had.

Casualties suffered by the 16th Infantry on D-Day are as listed below:  *2*