The First Heads for Vietnam

On 14 April [1965] the commander of the 1st Infantry Division, Maj. Gen. Jonathan O. Seaman, received a top-secret message from U.S. Continental Army Command instructing him to ready, for planning purposes, a brigade for deployment to Vietnam within a month. General Seaman informed his 2d Brigade, the division’s rapid deployment force, four days later. Then, on the twenty-second, he visited the Pentagon in hopes of obtaining more information from the Army chief of staff. General Johnson. “Jack,” Johnson told him, “the situation is getting real serious. And you better be prepared to send your division, or a part of it, to Vietnam by 15 June.” Seaman received specific confirmation of the Army’s intentions on 13 May, when planners notified him that he should consider 30 June as the brigade’s personnel readiness date. 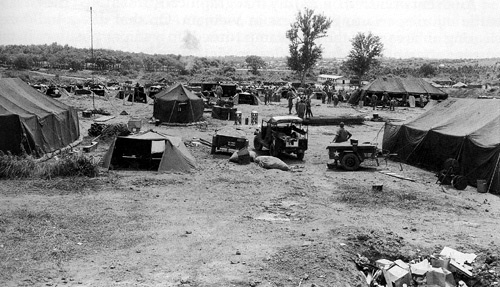 Over the next two weeks he and his staff worked out the brigade’s force structure for Vietnam. Then, toward the end of the month formal notification arrived that the brigade was indeed Vietnam bound. *1*

Seeking to make the 2d “the best possible brigade out of my own resources,” Seaman replaced those commissioned and non commissioned officers considered to be substandard with high-performing individuals from his two other brigades. He also filled out shortages in vehicles, armaments, and ammunition with requisitions from the other two. He understood that by cannibalizing his division for the benefit of the 2d Brigade he would make it more difficult to prepare his remaining brigades for any future deployment. Once in Vietnam, however, the 2d would face a multitude of perils and needed the best it could get. Therefore, as he recalled later, “I really tore that division apart.” *2*

Preparations for the deployment proceeded apace. At the end of May the 2d Brigade’s executive officer, Lt. Col. Edgar N. Glotzbach, made a liaison trip to Vietnam. Upon his return in the middle of June he briefed General Seaman and the brigade’s commanders and their staffs on the conditions that he had observed. Then on the twentieth the 2d Brigade commander, Col. James E. Simmons, and the advance party flew to Vietnam to make arrangements for the arrival of the brigade.

In the meantime, the deploying units completed their preparations for departure. The units included the 2d Battalion, 16th Infantry; the 1st and 2d Battalions, 18th Infantry; the 1st Battalion, 7th Artillery, equipped with 105-mm. towed howitzers; Battery C, 8th Battalion, 6th Artillery, armed with 155-mm. towed howitzers; and various support elements, including engineer, medical, and maintenance companies, police and military intelligence elements, and a radio research (or signal intercept) unit. During the first two weeks of June the brigade loaded its equipment on trains for shipment to California, the first train leaving Fort Riley Kansas, on the fourteenth. Between the twenty-first and twenty-fourth the rest of the unit went by rail and air to the Oakland Army Terminal. The troops then embarked on the Navy transport General W.H. Gordon, with three other ships moving the brigade’s equipment. The Gordon departed on the twenty-fifth. Once under way the men were officially informed of what they had long suspected: They were en route to Vietnam. *3* 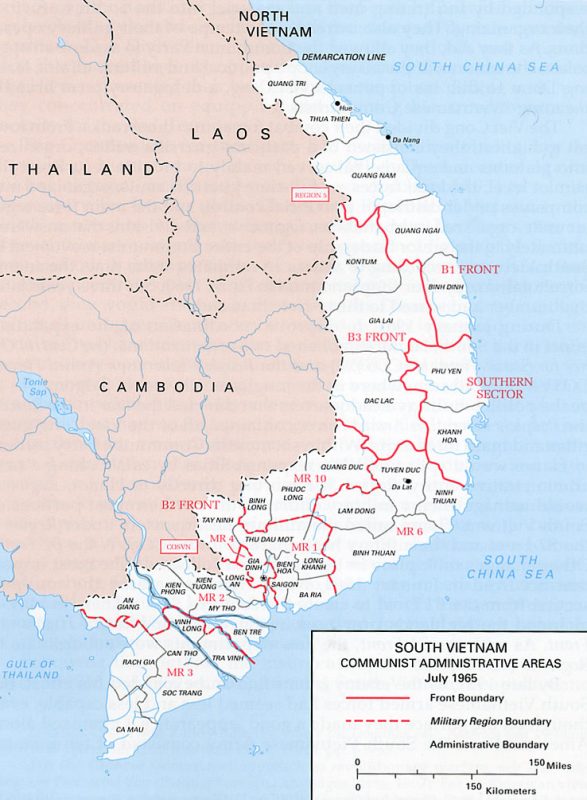 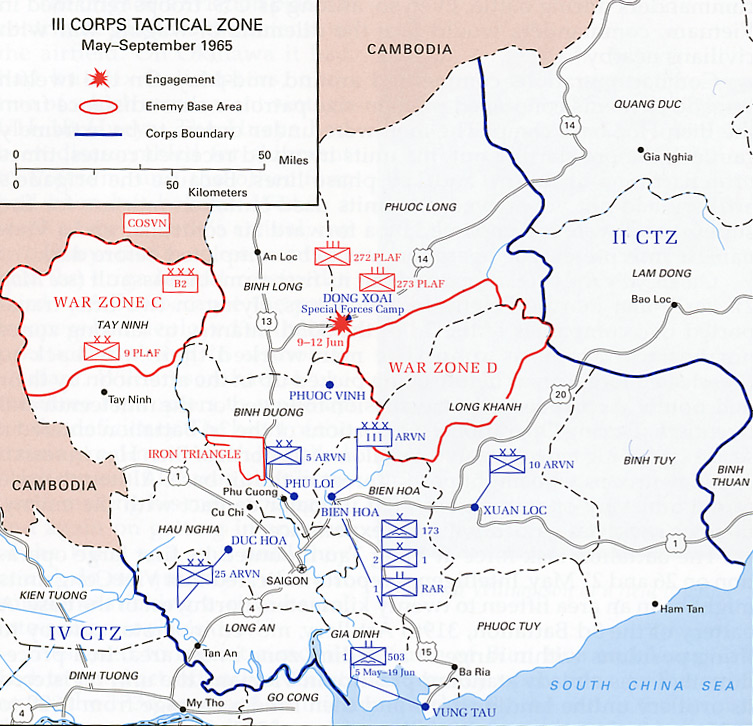 The brigade’s destination and mission in Vietnam changed a week before its arrival. Instead of establishing and maintaining defenses for port and supply facilities under construction at Qui Nhon in northern II Corps two of the unit’s infantry battalions, the 2d of the 16th and the 2d of the 18th, were to go to Bien Hoa to assist in securing the air base, while the third battalion, the 1st of the 18th, and an artillery battery proceeded to Cam Ranh Bay, about two hundred kilometers south of Qui Nhon, to provide security for the new port being built there. The Gordon reached Cam Ranh on 12 July, stopping just long enough for the infantry and artillery to disembark. Continuing south, the ship arrived at Vung Tau on the fourteenth. Over the next two days the troops made their way to the Vung Tau airfield, where they enplaned for Bien Hoa Air Base. Upon arrival, they moved by truck to their prospective base camp, about three kilometers southeast of the airfield, a site chosen because it lay astride a line of approach into the air base. There, for the first few days in Vietnam, Colonel Simmons’ force came under the command of MACV [U.S. Military Assistance Command, Vietnam], but on the nineteenth the 173d Airborne Brigade assumed operational control. The arrangement lasted until the 1st Division headquarters reached Vietnam in October. *4*

The change of station from Qui Nhon to Bien Hoa created supply problems. Food stores and ammunition earmarked for the brigade and prepositioned at Qui Nhon were now unavailable, and could not be easily replaced out of the Army warehouses scattered about Saigon, which were having trouble supporting the American buildup. For the rest of the summer Simmons’ brigade lived hand to mouth, and only the presence of a Navy commissary not far from downtown Saigon kept the men from subsisting on field rations for weeks at a time. Even then, ammunition became so scarce at one point during the summer’s operations that the brigade had to borrow artillery rounds from the South Vietnamese. *5*

On 17 July the brigade’s men began work on their first priority, construction of a base camp. Clearing the jungle and thick brush that clogged the encampment site, with some of the second-growth underbrush so dense that visibility was limited to a few feet only, they quickly slashed fields of fire so that they could lay down an adequate defense in case of an attack. On the night of the eighteenth-nineteenth the enemy mortared the area and probed the perimeter—an action that produced the brigade’s first battle-related casualty. By the end of month, sometimes working around the clock and despite daily downpours and nightly sniper fire, the brigade had completed the job. *6*

An event occurred on 22 July that graphically illustrated the kind of battle injuries awaiting soldiers in Vietnam. On that day a bulldozer clearing an area near the base camp turned up a sniper position. In the ensuing attempt to capture the fleeing Viet Cong, Lt. Col. Lloyd L. Burke, the 2d of the 16th Infantry commander flying overhead in his helicopter was shot down. As a result of injuries, Burke had to be evacuated and, eventually, returned to the United States. A later inventory by Burke himself bore sober witness to the cost of combat:

A rundown of my wounds reveals a hole in my right ankle, [a] hole in my left foot, a chunk of meat out of the left calf about as big as your fist and a compound fracture of the left tibia. Moving up the body my left index finger is gone, [there is] a big gash in my left thumb, [and] a badly bruised left hand. A hole in my right cheek about as big as your thumb and about 1 inch deep. That piece severed the nerve in my cheek causing the right part of my upper lip to be dead. [I have] superficial shrapnel holes in the face, head, arms, and chest. I’m told the flax [flak] jacket saved my life. It’s pretty well chewed up. *7*

But he was alive!

On 8 September the 2d of the 16th Infantry embarked on the brigade’s first battalion-size operation. Lasting two days, the mission provided logistical and organizational experience for the battalion but produced no contact with the enemy. On the sixteenth the unit conducted a second operation, about fifteen kilometers north of Bien Hoa. Although it again failed to find the Viet Cong, it found sufficient signs of their activity in the area to warrant the involvement of a larger force. As a result, on the twenty-third, with the 2d of the 18th Infantry back from the Central Highlands, Colonel Simmons mounted a two-battalion operation, the brigade’s largest since arriving in Vietnam. While carrying out this four-day mission, the force had its first encounter with the enemy Although precise numbers are unknown, it killed or wounded a number of Viet Cong while destroying well-defended, dug-in positions. On the twenty-ninth the 1st of the 18th ceded its mission at Cam Ranh to the recently arrived 1st Brigade, 101st Airborne Division, and rejoined the 2d Brigade. For the first time since reaching Vietnam, the brigade’s battalions were together at one location. *8*

The next month the 2d Brigade left the control of 173d Airborne Brigade to rejoin the rest of the 1st Infantry Division, which deployed to Vietnam at that time. Appropriately enough, the 2d Brigade’s last operation before rejoining its parent organization involved providing security for the arrival of a sister divisional unit, the 1st Brigade, 1st Infantry Division, at Phuoc Vinh. Two battalions, backed by artillery, began to patrol the area on 4 October, securing and clearing the site of the 1st Brigade’s base camp. The newly arrived brigade moved into its future home between the twenty-second and twenty-fourth. During the operation the Americans encountered no opposition, and the 2d Brigade returned to Bien Hoa on the twenty-fifth. *9*

[As for the rest of the 1st Division, the remaining two brigades, over 9,600 troops and their equipment, were in place north of Saigon by 2 November 1965.]